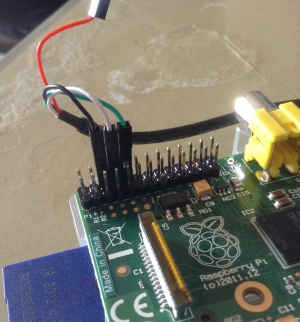 The Adafruit 954 USB serial cable can be used to:

When using the Adafruit 954 USB cable on Windows 7 the Prolific driver' seems already be installed, so you could skip this step. Simply connect the USB cable. You will see a device Prolific USB-to-Serial Comm Port; verify via Control Panel → System → Device Manager to get the port number.

The cable can be ordered via the internet.

Transparent case for the Raspberry Pi model B+ is too low

There are some problems with the transparent case of Raspberry Pi B+:

Driver problems; this leads to system crashes (Blue screens) and potential data loss. Very difficult to solve. Maybe another version of the driver should be installed?

This indicates that a kernel-mode driver attempted to access pageable memory at a process IRQL that was too high. Possibly the Prolific driver contains a bug.

A driver has called IoCompleteRequest to ask that an IRP be completed, but the packet has already been completed. Conflict amongst drivers. Most probably another driver did already process the request (and should not have done so).