The foundation of this work is the XBMC GSOC2010 project (link below), and my thanks go out to the folks that put in so much work and published it.

As of Aug 2012 I am using the following environment:

At present I have XBMC running on this platform but with a poor frame rate. The GUI runs on it's own at around 20fps, and video runs at 6fps. I'm currently investigating how to improve the video frame rate.

This section is intended to collate the key differences between Beagleboard and BeagleBoard_XM regarding XBMC. Problems implementing XBMC based on older information have more often been due to differences in other environmental factors rather than the hardware. However, it's probably worth keeping a list here of differences in the hardware:

For detailed information please visit the official XBMC site at http://xbmc.org/. There is also a useful associated wiki here: http://wiki.xbmc.org/index.php?title=Main_Page

XBMC is a media player, which, through a very professional GUI provides access to multimedia sources (audio, video etc.) residing on local drives or internet feeds. This section is intended just to highlight some of the specifics that are useful to know about running XBMC on BeagleBoard_XM.

The processor on BeagleBoard_XM contains an OMAP device containing an ARM processing core. The ARM core is not powerful enough on it's own to run XBMC, but fortunately the OMAP device has some features which can help.

The key to getting a smooth running XBMC on the board is to offload a significant proportion of the processing from the ARM core and onto the acceleration engines. Obviously, reducing amount of processing required and the amount of data that has to be transfered between internal blocks also helps.

One key point to note with XBMC is that the processing required to handle the very professional looking GUI is significant, and that the GUI continues to operate even if a video is being played (even if there is no sign of the GUI on the screen). This allows the menu with the video controls to instantly pop up if the mouse is moved. XBMC allows a significant amount of customisation for the GUI (referred to as a Skin) and simplification of the skin can help reduce the processing significantly. XBMC is generally run on platforms with much more processing power than Beagleboard_XM and as a result, the default skin is quite complex to show off the capabilities.

The default video players used by XBMC (DVDplayer and PAPlayer) do not make use of the OMAPs video acceleration. Therefore all of the video decoding is done using the ARM core which places an undue burden on the processor (hence the slow 6 fps frame rate). XBMC provides the ability to use other players using a configuration file /userdata/playercorefactory.xml. See here for details on how to change this http://wiki.xbmc.org/index.php?title=External_players. My chosen player is omapfbplay (although at time of writing, I am unable to make omapfbplay work on my build).

The video images are stored in two framebuffers (one holds the current image, whilst the second is used to construct the next image). The frame buffers are fundamentally blocks of main memory (SDRAM) which are reserved when the linux kernel first boots up (The size of these buffers can be defined in the uenv.txt file used by U-boot).

The following diagram shows how I hope to have XBMC running on the OMAP processor hardware: 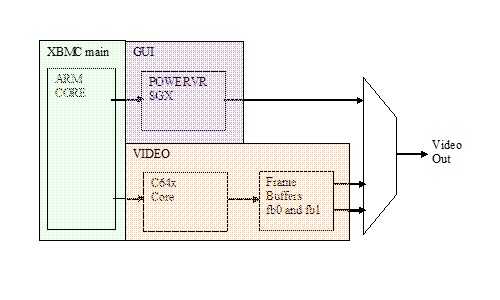 The following items are my current focus for this project:

The following are useful links that I have found which appear to be related to work done on BeagleBoard, so direct relevance is not clear.

Many thanks to the folks of XBMC GSOC2010, on which I'm basing my project.