BeagleSNES was created by Andrew Henderson and allows you to play SNES ROM games from a microSD card. In the following wiki, we will show you one method to get the SNES working on your BBB. All information was derived from the BeagleSNES guideand can be referred to for further information.


A copy of the software ROMS (.smc) that you wish to use with BeagleSNES, which are not provided by BeagleSNES, beagleboard.org, or Circuitco. 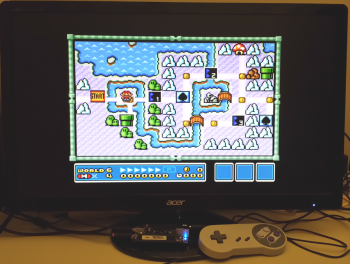 In this tutorial, the image that we will download contains the complete BeagleSNES system and can be booted upon completion.

1. Download the BeagleSNES microSD card image by clicking here.
2. Uncompress the image using 7zip.
3. Insert the microSD card into your USB microSD adapter. Plug it into your computer.
4. Using a disk imager such as, Win32 Disk Imager, write the image file onto your microSD.
Important: Make sure you write onto the correct Device!
5. Once it is finished, you can boot beagleSNES from your BBB! In the next steps, we will see how you can insert ROMS into the beagleSNES system.

Installing your ROMS and Screenshot/Pictures

1. Insert your freshly imaged microSD card into the usb microSD adapter and plug it into your BBB. Connect your BBB to your computer using a mini USB data cable and wait for it to load on your computer.
2. On your host computer, make a new folder called, "ROMS." Then, transfer all the files (ROMS and screenshots) that you want to mount to the beagleSNES system into the "ROMS" folder. When you have finished transferring all the files, copy that folder into your BBB. (i.e. My Computer > BEAGLEBONE(X:))
3. Using a terminal emulator such as PuTTy, we will serial connect into the BBB and transfer the files directly into the microSD card. Once PuTTy is configured, log in as: root.
4. We will be using the following sub-directories to transfer files. In the following, I will use rom1.smc and rom1picture.png as examples:

5. We will now transfer all the files into the appropriate folders so we can play them on our system. Using your actual rom and picture names, transfer the data through these commands: (I will use rom1.smc and rom1picture.png in this example)

6. If you wish, go into the beaglesnes directories to check that you successfully transferred all the files.

1. In order to configure the ROMS to your beagleSNES, we will have to make changes in the games.cfg file. Browse to that folder through these commands:

2. We will now open games.cfg and make changes that apply to the game. Type the following into your terminal:

3. I will write an example of what you may see and what you have to replace. I will insert comments using "//".

4. Press ctrl+x to exit 'nano' and say "yes" to save all changes.
5. You have now successfully configured all your ROMS. Unplug both the mini USB data cable and microSD USB adapter and now we will set up the hardware for beagleSNES!

Playing beagleSNES on your Monitor

1. Plug in your microSD card to your BBB.
2. Plug in your USB Tomee Controller to your BBB.
3. Plug in your BBB to your TV/Monitor using HDMI or through an alternate adapter.
4. While holding down the boot button of your BBB, plug in the 5VDC power and wait for beagleSNES to boot up.
5. Once it is done loading, you will see all of the ROM info that you edited in the games.cfg file and you are set to go!

Installing your ROMS and Screenshot/Pictures

Each game listing inside games.xml exists between a pair of <game></game> tags. The sample template contains ten games: one game with all game information fields included (the “GameTitle1” game) and nine other entries that include only the bare minimum fields. At a minimum, you must include the title of the game (inside the <title></title> tags) and the filename of the ROM for that game (inside the <rom></rom> tags). The other optional tags can be used to specify a description, genre information, year the game was published, and a box/screenshot image. For more information on these tags and how to use them, please refer to the BeagleSNES manual.

Here is an example of what you may see and have to replace in a games.xml file. I will insert comments using "//".

Note that the ROM and image filenames listed in games.xml are only the names of the files themselves. No path prefix needs to be added to these entries as BeagleSNES knows where these files are located in the filesystem. For example, an entry like “rom/filename1.smc” is incorrect for the <rom> entry, but “filename1.smc” is correct. Once your games.xml file has been updated, you are ready to set up your hardware to use BeagleSNES!

Playing BeagleSNES on your Monitor

Please refer to the BeagleSNES manual for more information about the following topics: