An FPGA is primary used for computationally intensive, high-speed and/or parallel processing tasks while the ARM micro-controller is widely used due to its versatility, many manufacturers implement it as the core of their applications (Including he ZYNQ family of devices). Because ARM devices are so widely used across the processor sector there is a variation of operating systems available. An application that caused this note to be written was a video application using an FPGA as high speed – parallel video processing engine and a dedicated ARM micro-controller as human interaction interface. The solution provided is to use one Chip Select area of the micro-controllers External Memory Controller (EMC) in SRAM mode and connect this to the FPGA. Figure 1shows the setup of an example video design. 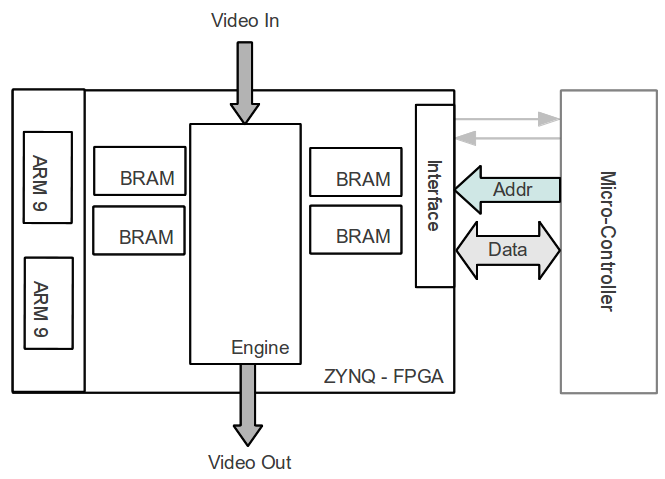 The FPGA connects via the External Memory Interface (EMI) to the ARM processor. To prove this concept some design decisions were taken:

The details of the micro-conroller can be obtained from: www.nxp.com The LPC3220/30/40/50 embedded micro-controllers are designed for low power, high performance applications. NXP achieved these goals using a 90 nano-meter process to implement an ARM926EJ-S CPU core with a vector floating point co-processor and a large set of standard peripherals.

The NXP implementation uses a ARM926EJ-S CPU core with a Harvard architecture, 5-stage pipeline, and an integrated Memory Management Unit (MMU). The MMU provides the virtual memory capabilities needed to support the programming demands of modern operating systems. The ARM926EJ-S also has a hardware based set of DSP instruction extensions, which includes single cycle MAC operations, and hardware based native Jazelle Java Byte-code execution. The implementation has a 32kB instruction cache and a 32kB data cache. The LPC3220/30/40/50 includes a whole set of peripherals and memory support:

Features of the EMC are: 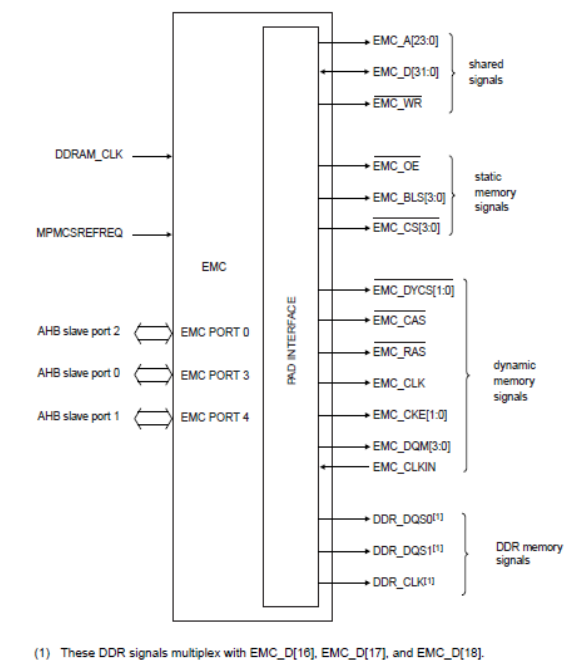 The External Memory Controller (EMC) has four memory areas where static memory can be connected, and an FPGA can be seen as static memory. The FPGA - micro-processor connection uses for this design the memory range of chip select CS2 (Figure 3). A single FPGA will occupy only a small amount of memory in this address space. When the processor read and/or writes to this EMC_CS2 address space it accesses the contents of registers and memory blocks (FF registers, BlockRAM and/or distributed memory) in the FPGA. Read and write operations from the EMC to static memory a fairly simple and straight forward. Figure 4 shows the waveform of a read operation and figure 5 shows the write operation. In case it might be needed, the EMC controller contains a register set which configures the control access delays for the static memory. For the description an use of these registers consult the LPC3250 User Guide.

Since for the demo/test design, only two Block-RAMs are used, the address decoding is not very fine tuned. The address space to access the Block-RAM appears several times in the CS2 address block of the EMC. When the FPGA is effectively used in an application as co-processor, pre-processor, high-speed calculation or high-speed communication engine for the ARM micro-controller different Block-RAM and separate registers need to be individually addressed. In that case, it will be necessary to fine tune the addressing of the FPGA from the micro-controllers EMC. 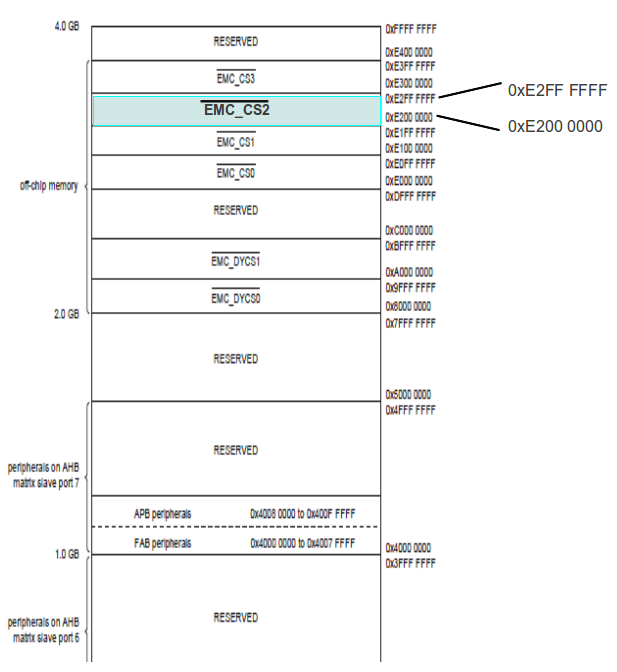 Figure 3: Cut-out of the External memory map from the LPC3250 memory map. 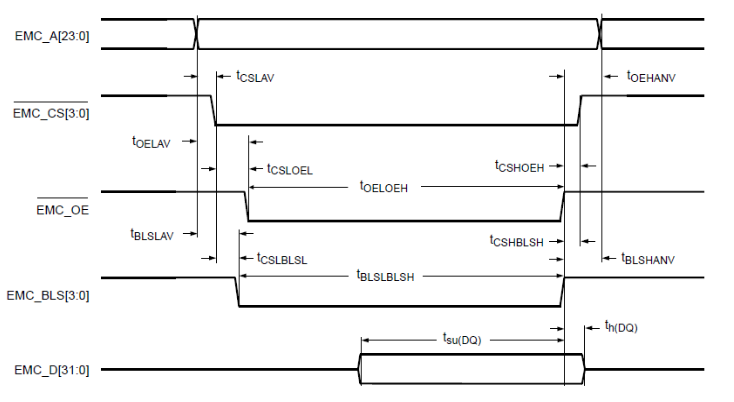 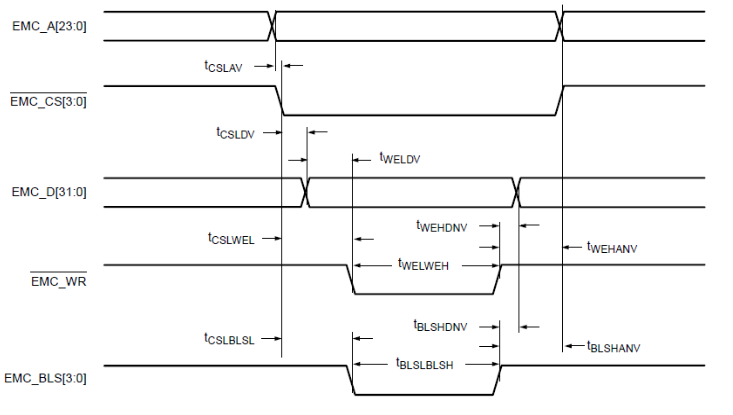 In case it is needed, the EMC controller contains a full set of configuration registers for every possible type of memory that can be connected to the EMI interface. It is thus possible to set read and/or write delays, bus turn around times, etc.

To get the finesses of this, please read the LPC datasheet and User Guides. 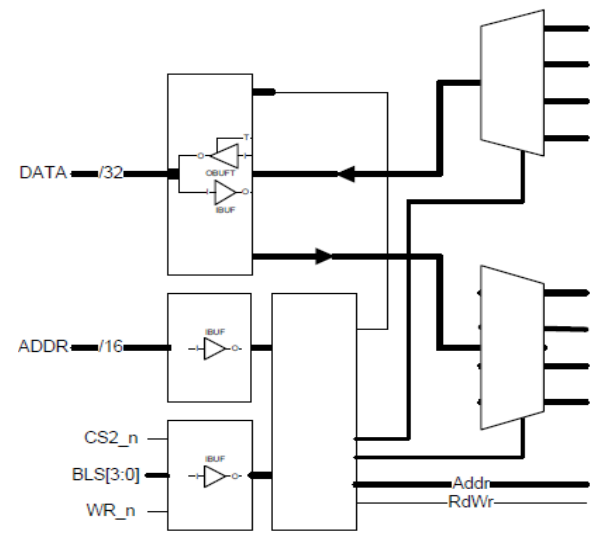 The demonstration design contains two Block-RAM components, one used to write to and one used to read from. The other access ports of both Block-RAMs are connected together and when the Block-RAM for write is completely full, data is transferred to the read Block-RAM. When the read Block-RAM becomes full, data can be read from it, Figure 7. Correctness of the read and write operation can easily be checked this way. Of course, a real life application will probably have multiple Block-RAM. Distributed memory and normal FF registers that can be written and/or read via the EMI interface of the micro-controller. 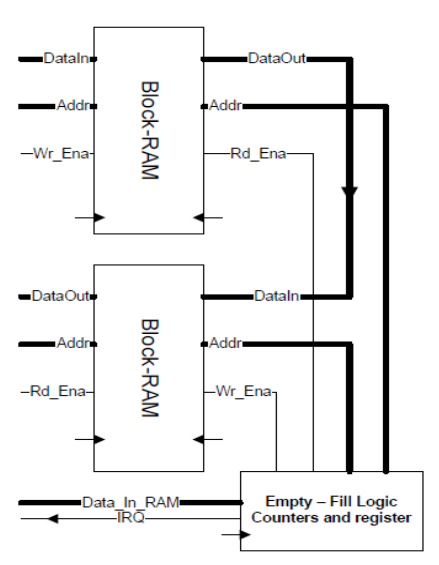 The connection of the LPC3250 component and the FPGA on PCB board level is very important.

In most cases, in order to let the micro-controller and the FPGA exchange data, it is necessary to use level shifting components. Figure 9 shows a schematic (figure 10a photo) of the setup. 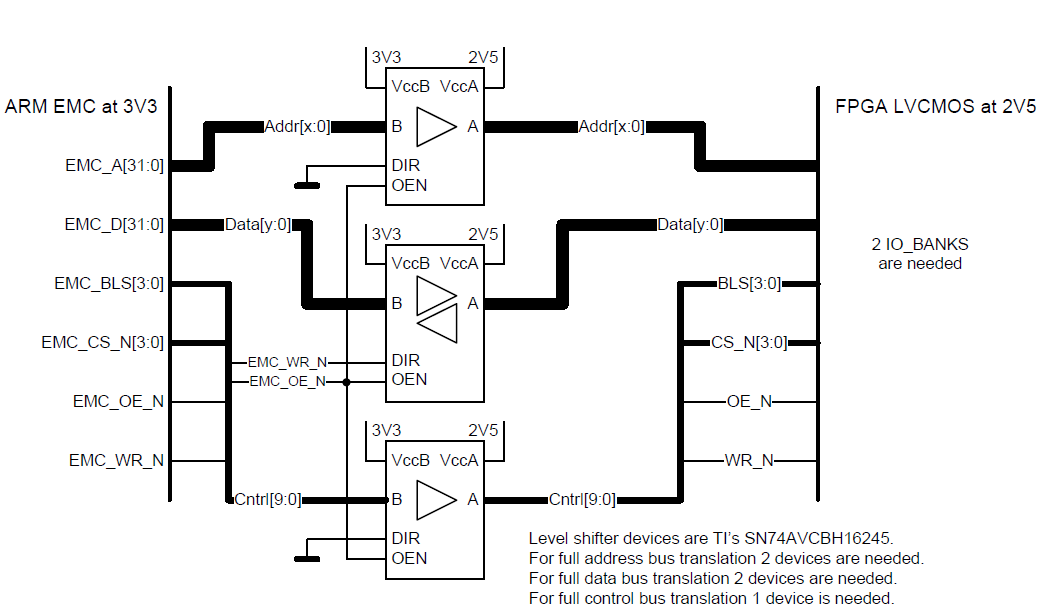 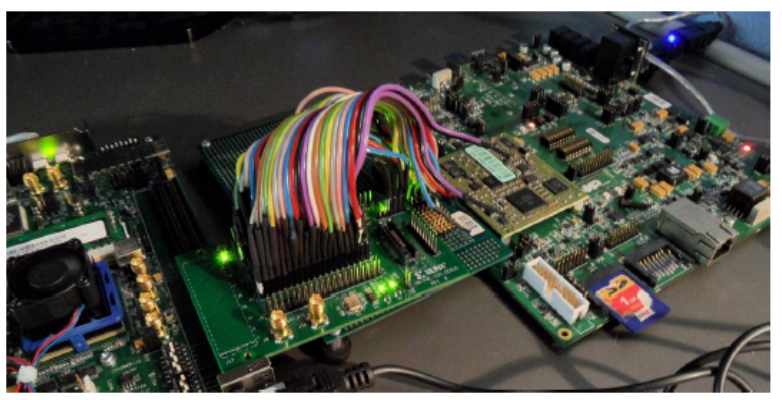 Figure 10a: Photo of the realized setup.

Make Linux work on the Phytec board.

The following description describes how to build and port Linux onto the Phytec board and assumes that the host computer runs a Linux distribution, as Ubuntu. The host computer is connected to the Phytec board via a serial cable (at the side of the PC the RS232 cable is probably converted to USB and a USB driver translates all RS232 communication for the PC).Firstly your own version of Linux needs to compiled, to do this a PC running Linux or at least a PC equipped with a virtual machine running Linux is needed.

The Linux Target Image Builder (LTIB) will be used to generated the embedded kernel. LTIB, the operating flow is shown in figure 11, is a tool used to develop and deploy Board Support Packages (BSP) for a number of embedded target platforms including PowerPC, ARM, and Coldfire. It can be found and downloaded at: http://bitshrine.org/ltib/.

LTIB will not only compile the kernel but also supply a root file system, an additional boot loader (Das U-BOOT) and further everything you need to write your own applications. To start programming, a compiler is needed and since it is not included in with LTIB it needs to be downloaded from the WWW. Recommendation: Download the command line compiler from CodeSourcery. It's free, and other tried/tested compilers were badly documented or not compatible with the ARM926EJ-S core in the NXP LPC3250 on the Phytec development board. Following pages provide a tutorial to build a Linux kernel for the LPC3250 on the Phytec PhyCore board.

REMARK: In the commands that should be typed at the command line heave the ComicSans MSfont, that way they can easily be recognized.

Install LTIB on the host:

The list of all options for LTIB is showed in table 1.

Place the system on the SD-card.

Make sure no other boot loader is running and delete all previous boot loader environments.

Congratulations, A customized ready to start Linux kernel is available for the Phytec development board. Type:

If the Linux build procedure is done correctly the system should boot to a prompt. What's now needed is some home made programming to show that the micro-controller can write and read from the BlockRam memory in the FPGA. A normal boot procedure, after reset, takes following steps:

As earlier written a embedded system is not needed to run a communication between the ARM micro-controller and the FPGA but it helps ease writing applications in more complex application. To prove the OS approach, an embedded Linux operating system is chosen. Reasons for this choice are:

Setting up the tool chain.

First: Using the CodeSourcery compiler is not a must. If another compiler is available or more familiar, please use that. CodeSourcery is used in the application note because I liked it, it is free (lite version) and works perfect. One thing to remark is that all the source files of your BSP have to be supplied manually.

These files are available at:

Insert these files into:

The following provides a help in understanding memory management of Linux based systems.

Hint: Read "Linux Device Drivers" from O'Reilly Media if deeper understanding of Linux memory management is wanted or needed (The book is available in electronic format for free).

Linux is a virtual memory system, meaning that the addresses seen by user programs do not directly correspond to the physical addresses used by the hardware. Virtual memory introduces a layer of indirection that allows a number of nice things to happen. Programs running on the system can allocate far more memory than physically available. Even single processes can occupy a virtual address space larger than the system's physical memory. Virtual memory also allows the program to play a number of tricks with the process's address space, including mapping the program's memory to device memory.The following text list the address types used in Linux and figure 12 shows how these address types related to physical memory.

Bus addresses are highly architecture dependent. They are used between peripheral buses and memory. These are often the same as the physical addresses used by the processor, but that is not necessarily always the case. Some architectures provide an I/O memory management unit (IO-MMU) that remaps addresses between a bus and main memory. An IO-MMU can make life easier in a number of ways (A buffer scattered in memory can appear continuous to the device). Programming the IO-MMU is an extra step that must be performed when setting up DMA operations.

These are the regular addresses seen by user-space programs. User addresses are either 32 or 64 bits in length, depending on the underlying hardware architecture, and each process has its own virtual address space.

Memory used by the design

The physical memory discussed above is divided into discrete units called pages. Much of the system’s internal handling of memory is done on a per-page basis. Page size varies from architecture to architecture but most systems currently use pages of 4096 bytes.

The FPGA is accessed as memory via the mmap() function, discussed hereafter. In order to use the function some information how memory can be accessed in a uniform way in order to make design portable. The only device independent way to get to the physical memory with the mmap() function is by using the “/dev/mem” file.

This /dev/mem file is a special file that provides access to physical memory. The size of the file is equal to the amount of available physical memory. A system running 32-bit operating environment can have access to memory larger than 4GB, and it is even possible to access memory beyond 4GB..

The constant PAGE_SIZE (defined in <asm/page.h>) gives the page size on any given architecture. Memory addresses, virtual or physical, are divided into page numbers and an offset within that page. If pages of 4096 bytes are used the 12 least-significant bits are the offset and the remaining,bits indicate the page number.

Discard the offset and shift the rest to the right then the result is called a page frame number (PFN). Convert between page frame numbers and addresses is a fairly common operation. The macro PAGE_SHIFT tells how many bits must be shifted to provide this conversion. 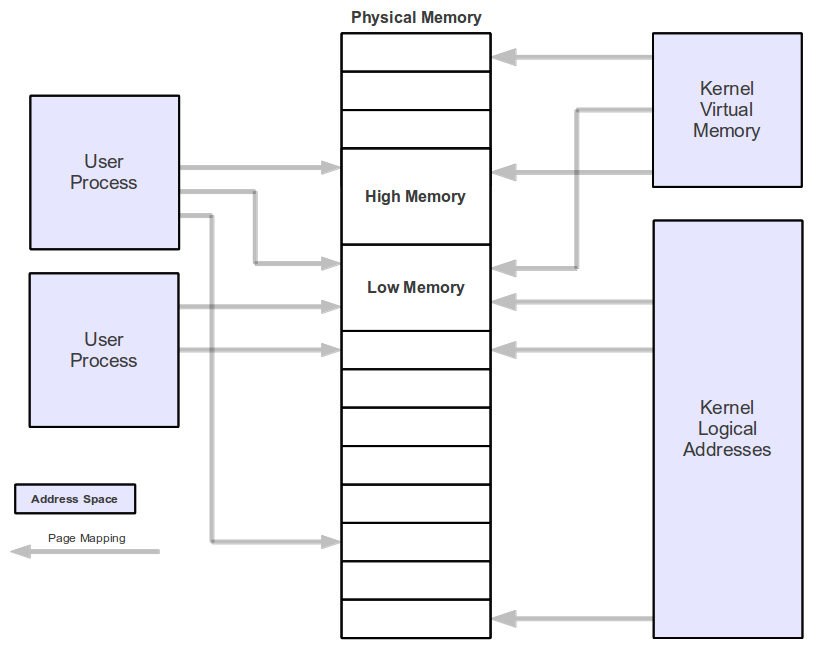 Specifies the number of bytes, length, of the file to map. The length value cannot cause the mapping to extend beyond the end of the file. If length is not specifying an integral amount of pages, the map is extended to the next highest page boundary. The left space is set to binary zeroes.

Specifies the protection status of the mapped memory. It is either PROT_NONE or the bit-wise OR of one or more of the described flag constants below:

Note 1: It is not permitted to specify PROT_WRITE when the file descriptor of the file doesn't allow writing.

Note 2: Calling the mproctect function allows the protection status of the mapped memory to be changed.

Specifies one or more option flags, combined using the or operator (|). Each flag should be specified as one of the following symbolic constants.

the overlapped part of the existing mapping(s) will be discarded. If the specified address cannot be used, mmap() will fail.

Specifies the first byte of the file to be mapped. The offset must be an exact multiple of the system page size (returned by sysconf(_SC_PAGE_SIZE and in most cases 4096 bytes)

C-source code of a User Program.

links to NXP and Phytec pages