This lab runs on the Beagle xM running the 3.2 kernel. (No BeagleBone Black version yet).

This is a four part lab that explore the video system drivers. The labs demonstrate the Linux V4L2 and FBdev drivers as well as basic file I/O, through four small applications: on-screen display (OSD), video recorder, video player, and video loop-thru (video-capture copied to video-display). It's based on the materials used in TI's DaVinci System Integration using Linux Workshop. The workshop is based on the DVEVM. I've converted those materials to the BeagleBoard.

This lab shows three ways to write directly to the framebuffer (/dev/fb0) on the Beagle:

This is the first of 4 exercises:

The goal of this part is to build an on_screen display for the Beagle using the FBDEV driver. From a coding perspective, it’s an inspection lab only.

Make sure you have the most up to date versions.

This file is 640 (width) by 480 (height). All the code that follows assumes the image is this size. (You may change the size, but you'll also have to change the code.) 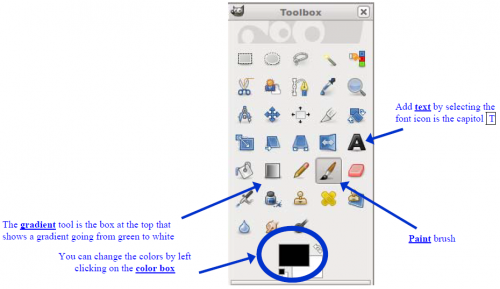 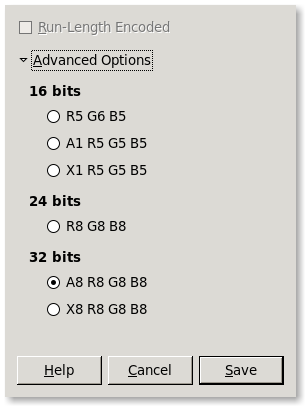 When you are finished, save with File:Save. Then exit Gimp. The file should save as RGBA, that is red, green blue, alpha. Where alpha is the transparency. It DOES matter what you name the file because later, during the building process, this file is specifically copied to the target. This name also makes it easy to remember it’s a 640x480 Bitmap image in 24-bit RGBA.

Examine two of the video files

The thread function in osd_thread.c is video_thread_fxn() which uses the helper functions from video_osd.c which supports alpha blending:

The application assumes the picture is supplied in a 640 x 480 32-bit ARGB (8-8-8-8) format, which should be the case if you followed the previous gimp instructions.

What do you see?

The goal of Part b is to examine v4L2 video capture via a simple video recorder app. This is an Inspection lab only.

This file contains a single function, video_thread_fxn(). This function encapsulates the functionality necessary to run the video recorder and is analogous to the audio_thread_fxn() that was used in the previous lab.

video_input_setup()
This function is used to detect the video standard which the web cam is using and calculate the corresponding buffer size of a single video frame. It opens and configures the Linux V4L2 video capture driver. The driver uses driver-allocated (as opposed to user-allocated) buffers that are mmapped to the user space to store video frames. Advanced users can take a look in video_input.c to see the details.

fopen()
Standard Linux I/O (i.e from #include <stdio.h>) call to open a file where the captured video data will be written
for() loop

This is the entry point for the application. main() does the following:

You will get a message from the application indicating that it has captured video frames. Check the following to ensure that the video has recorded properly:

The file should be about 60 MB in size. The reason that the application only records 100 video frames is to keep from overflowing the /tmp directory.

The goal of this part is to examine FBdev display driver using a video display app. This app will play back the file recorded in Part b (and add OSD from Part a). This is an inspection lab only.

As opposed to the recorder, this application uses ioctl calls to manage the framebuffer at /dev/fb1 to display video frames it reads from the /tmp/video.raw file:

video_osd_setup()
Creates a table of appropriately sized buffers to hold video frame data that is read from the file. The driver uses driver-allocated buffers which are mapped user space to store video frames.

Use “ls –lsa /tmp/video.raw” to verify that video.raw exists and has a greater than zero file size. The application is hard coded (using a #define statement in video_thread.c) to read data from the file /tmp/video.raw. If you have powered off or reset since running Part b, the video.raw file will have been cleared. If so, go back to lab07b_video_capture to create the video.raw file again.

The goal of Part d is to combine the recorder (Part b) and playback (Part c) into a video loopthru application.

In this portion of the lab, you will combine Parts a (video capture) and b (video playback) into a single video loop-thru application.

In Part b, we recorded video from the web cam via the v4L2 input and placed it into a file (video.raw) – this used an fwrite() command to write the video buffer to a file. In Part c, we did an fread() of the video.raw file and sent that video to the display driver.

Before we start copying, cutting, and pasting files and code, let’s think about what must be done to get the loopthru lab to work.

In this lab exercise, we will start with the Part c files, then edit them to create the loopthru code. Based on this, generally what functions should be required for our while() loop in the Part d Video Loopthru?

To summarize, the following lab procedure will take the _capture and _playback files and combine them into a loopthru example.

Once you have the video through working, demo your program to get credit.