We designed a miniature RC tank that can be controlled over WiFi anywhere on campus with a camera that can be used for FPV (first-person view). To accomplish this, we utilized some open source 3D models of a tank from EdRover (link shown in later section). We selected our parts based on availability and compatibility with our system, such as an h-bridge, a 5V regulator, etc. Lastly for the controller of our system, we elected to use a Raspberry Pi 3. The tank body was premade with mounting for that controller and due to its built in WiFi module, we were able to connect over WiFi very reliably. Lastly we utilized ssh to pipe the video feed into our host computer from the on-board camera, and we used Blynk to control the motors over WiFi.

A picture of the tank can be seen to the right. The blynk app is also shown in the picture along with the batteries that we are using to power the system. 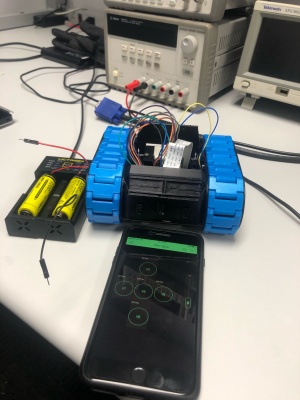 All of the packaging that was done for our project was fitting the circuitry and the Raspberry Pi 3 into the 3D printed body (provided by EdRover on Thingiverse). A miniature breadboard was used to mount the dual H bridge as well as the 5V regulator. The mounting holes were 3D printed and therefore the size of the screw can be adjusted based on what is available.

The link below is to the github where we kept all the files for this project. The readme.md has instructions for what to download and should be followed before trying to run any of the other provided code. The github also includes the code that we have written that can be used to run the tank.

The website that is shown in the link below was used for all the 3d printed parts as well as some suggested hardware for a different build. While we know it works, we opted to choose different parts as noted below.

In place of the suggested mx1616 dual h bridge we used the L293d dual h bridge as this was previously used in ECE230 and is sold at the Rose-Hulman ECE parts room. We also used a 5V regulator to control the power input into the Raspberry Pi 3 which was likewise sold in the parts room (and we noted pushes out much less heat than expected). Additionally we used a camera attachment for the raspberry pi which can be found at the link below. 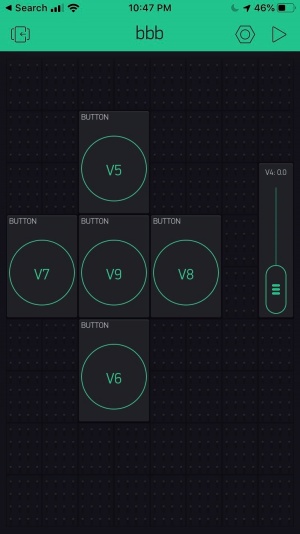 After making the blynk app, be sure to update the AUTH variable in the motorDrive.py and rename it to yournameRCtank.py. Then run the file by using the command

in a separate terminal run the following command.

This will start a video feed from the camera that will play on your screen and show you what the tank sees.

Once running the Blynk app use the buttons to drive the tank around, being careful not to bump into things to hard.

Our tank was completely 3D printed so all of the features can be customized to a specific need. We followed the 3D prints that were given since we were using the same setup(Raspberry Pi 3 with similar parts). Our tank is able to driven using the Blynk app anywhere on campus. As long as the internet connection doesn't cut out the tank should be able to drive anywhere where RHIT-OPEN is available and we can control it from our computer. We were able to drive the tank out into the hallway of Moench while sitting in B200 watching the camera feed.

In this project we are using the RPi.GPIO library to control the motor input signals via PWM. We set the PWM frequency to 40Hz as this is a reasonable speed for the tank. Four GPIO pins are connected to the dual h bridge to signal when and how to turn the motor. When the user wants a motor to spin forward the first input signal needs to be high while the second should be low. The opposite is true for turning the motor backwards. In order to turn each direction we set one motor driving forward and the other driving backwards. Our software accepts a blynk button press and upon the press runs a section of code that will turn the motors in a way that the user has requested. In the code we had to account for the motors driving at slightly different speeds so we introduced an offset variable which ensures that the tank drives in a straight line. This offset variable will need to be adjusted to new motors that are used for this project or future projects.

The major tasks for this project are as follows:

In the future more features could be implemented on the blink app such as a feature that allows you to change the speed of the tank, and a joystick controller would be preferred. Additionally an on board charger would be really nice so you do not have to remove the batteries but rather just plug in a USB to charge. Lastly a way to notify the user which WiFi the tank is currently on along with its IP address.

For us this was also somewhat of a fun throwback. We made a simpler tank back in ECE230 that was controlled over Bluetooth. To one up that previous design, my partner and I spent a lot of time working out various improvements to our parts list and updated the tank for a more modern feel, particularly with the live camera feed and WiFi connectivity. All said and done, I believe we are both proud of how it turned out.