GDB, the GNU Project Debugger is a debugging tool provided with the GNU Compiler Collection (GCC). GDB allows you to stop and start a running program, examine its functioning, and make changes.

The configure script provided with OpenOCD 0.5.0 already compiles OpenOCD to support the GDB debugger. The OpenOCD Ubuntu Package also includes GDB Support. If you have installed OpenOCD according to the guides on the Compiling OpenOCD page, your version of OpenOCD already supports GDB.

GDB Debugger is provided by default on Ubuntu 10.04. However, this version of GDB is only built to debug programs running on a Linux PC. You will need to download or compile a version of GDB that supports embedded devices. One such GDB build is provided with the CodeSourcery ARM toolchain.

CodeSourcery provides development tools for use with embedded devices, including a GCC cross-compiler and a GDB build for ARM targets. Download the latest version of the .bin installer from http://www.codesourcery.com/sgpp/lite/arm/portal/release1592. Direct link is here. Save this file anywhere on your computer, then navigate to it in a terminal window.

You should see a loading bar followed by an installer GUI. However, you may see an error stating that the installer doesn't support the DASH shell.

If you see this error, disable DASH by typing

This will give you the option to enable DASH by choosing <YES> or disable it by choosing <NO>. Choose no and run the installer again.

You should see the installer GUI now. The installer is fairly straightforward. This guide will assume that you choose the default option on each page. 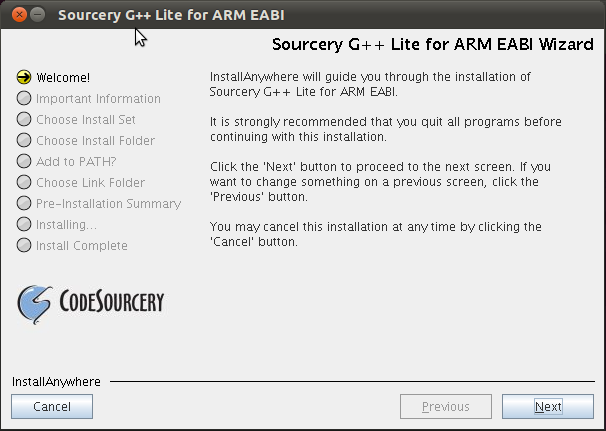 The installer installs the CodeSourcery toolchain to your home directory. Add it to your PATH by editing your environment variables:

This backs up your environment file and then opens it a text editor. (The backup is just in case something goes wrong; unless you make a mistake, you can delete backup_environment later.) Find the line "Path=..." (probably the only line). Add the following to the end of that line, inside the quotes:

In the terminal window, run arm-none-eabi-gdb from any directory.

Your terminal window should look like the image below, with a prompt reading (gdb) in place of the normal > command prompt.

Run OpenOCD as normal, as described in Running OpenOCD on Linux. To connect to OpenOCD, start GDB as above:

OpenOCD listens for GDB connections on port 3333. In GDB, connect to OpenOCD by typing target remote localhost:3333. (In this guide if you see (gdb) at the beginning of a command, that means enter that line into the GDB command prompt. Don't actually type the characters (gdb).)

Before doing anything else, run reset init on the target. Use the monitor command to tell GDB to send the command to OpenOCD, like this:

This is important. You need to do this while GDB is connected to the OpenOCD, or you won't be able to halt or reset the target. If you don't run monitor reset init, you will encounter errors like this:

You can send commands to OpenOCD through GDB just like you can through a telnet connection. Type monitor, then the command, then enter. You can see a list of common OpenOCD commands here.

You can use the Linux command cd to change the current working directory in GDB. This changes the current directory only for GDB, not for Linux; when you exit GDB, you will be back in the directory where you started.

Instead of typing commands yourself every time you start GDB, you can create a script to always start GDB with the same series of commands. This script file is named .gdbinit. GDB looks for it in the current working directory.

You can use the script below to have GDB automatically connect to OpenOCD and run reset init on the target. Create a new folder in your home directory called GDB_OpenOCD_init, and a new text file in that folder. Copy the code below into the file:

Save the file as .gdbinit and close it. Like any file whose name begins with a period, .gdbinit is a hidden file. To see it, open the folder and press CTRL-H.

To test the init script, start OpenOCD as normal. Then navigate to GDB_OpenOCD_init/ and run CodeSourcery GDB.

You should see something like the image below. (In this image the target device is the Beagleboard. With different hardware the output of reset init will be different.) 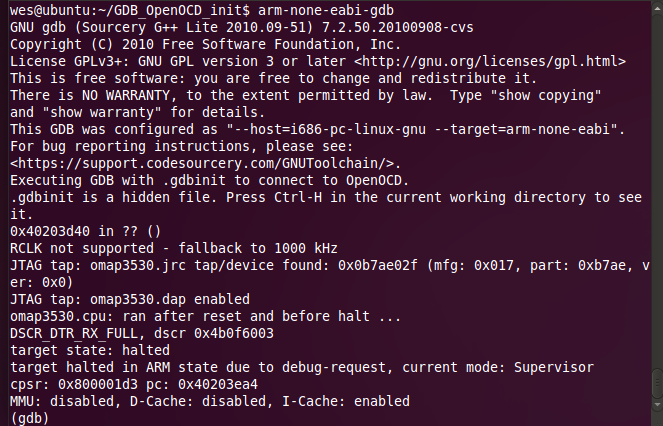 Debugging a Program on the Beagleboard

For this section you will need the Ubuntu packages git and make. Install the following packages by opening a new terminal window and typing:

You may see a message stating that these pachages are already installed. That's fine.

Navigate to your home directory and use git to clone into https://github.com/mlu/cortal_dendrites.git.

The folder should now contain a binary file called LEDblink. It also contains a hidden file called .gdbinit. This script should start GDB and load LEDblink, but the file is outdated and no longer works. Delete it so that you can't accidentally run it later.

Start OpenOCD as normal, then open a new terminal window. Run GDB, connect it to OpenOCD, and reset the Beagleboard. You can do this manually:

...or using the .gdbinit script you created above: 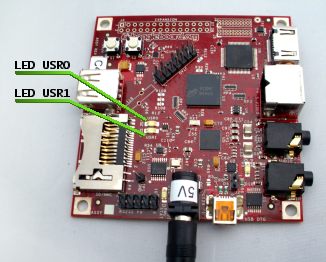 Wait for the lights to come on, and then halt the Beagleboard again.

Navigate to the directory containing LEDblink and load it:

Now run the program by typing:

You should see the USR0 and USR1 LEDs pulse on and off in sequence. LEDblink will run forever if you let it. When you're ready to stop it, press CTRL-C in the GDB terminal. To start it again, type cont again.

When debugging a program it's often useful to stop it in the middle to see what it's doing. You can do that with GDB using breakpoints. When you ran the command symbol-file LEDblink above, you loaded a file that allows GDB to map lines and functions in the source code to instructions in the executable. You can now instruct GDB to stop the program when it reaches a particular line or function.

Add a breakpoint associated with line 22 of LEDblink.c, then let LEDblink continue, like this:

GDB will run until it hits line 22, then return you to the command prompt. Line 22 is inside a loop that never terminates, so GDB will hit this breakpoint over and over. Each time GDB hits the breakpoint, you can tell it to proceed by typing cont again.

You can have multiple breakpoints at a time. Type:

...to create a second breakpoint at line 30. You can get a list of all breakpoints by typing:

info breakpoints lists your breakpoints by number. You can delete a breakpoint by entering delete followed by a number. 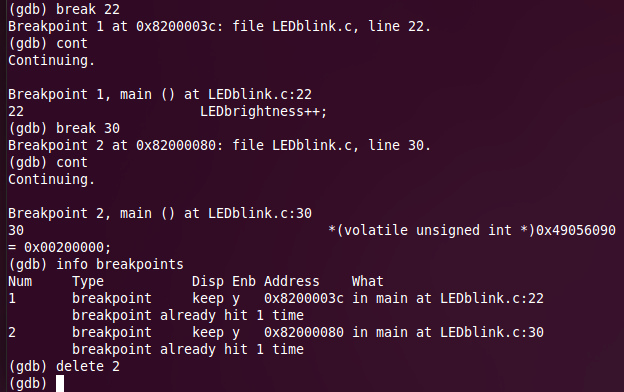 You can use GDB to read the value stored in a memory address with the x command. Type x followed by a memory address to output the value at that address. GDB assumes that the address is in decimal format unless you preface it with 0x to indicate hexadecimal. Memory addresses are usually expressed in hexadecimal, so remember to type 0x.