Transclusion is generally the inclusion of the content of a document into another document by reference. In a Wikipedia context, it is the use of the template functionality of MediaWiki to include the same content in multiple documents without having to edit those documents separately. Template transclusion is the common way to use template messages, and is implemented by using a template tag, with the form: 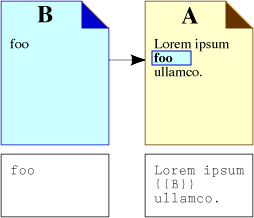 If the source is in any other namespace (e.g., "User:Example"), you must use the full name, including the namespace, thus: {{User:Example}}

To transclude any source page (within a single MediaWiki project, such as en:Wikipedia) within another target page, include the following code:

Whenever the target page A with this code is rendered, the engine will include in that place not the code itself, but the entire content of the source page B, SOMEPAGE.

For example, you might decide to create a (template) page with your mailing address and include that template on not only your page, but all your friends' pages, too. When you move your television and couch to another apartment, you will change your address template, and automatically, that new information will appear on all your friends' pages.

Ted Nelson coined the term "transclusion," as well as "hypertext" and "hypermedia", in his 1982 book, Literary Machines.

By using "noinclude", "onlyinclude" and "includeonly" markup, it is possible to transclude part of a page rather than all of it. Such partial transclusions can also be achieved by transcluding from other pages such as subpages. It is often useful not to transclude some information, such as template documentation.

For an example of how this technique can be applied to simplify the creation of summary articles, see [1], which consisted of a collection of transcluded lead paragraphs from several main articles.

One can cut and paste the text to be transcluded into a subpage, then use the name of the subpage in the transclusion template. This approach can only be used with subpages from User, Talk or Wikipedia pages; currently, subpages cannot be created from main article pages.

Some pages on Special:Specialpages can be transcluded, e.g. Special:Newpages

Alternatives to transclusion by template

An extension called Labeled Section Transclusion enables marked sections of text to be transcluded. An extension with a somewhat similar function is PageVariableExtension.

The Semantic MediaWiki extension uses inline queries to query and display semantic data. There are currently two ways to perform transclusion or something similar: