The MinnowBoard MAX comes with a UEFI based boot firmware, and as such follows the basic UEFI specs. In general, if your boot media is setup according to spec (usually containing a efi/boot directory in the first partition which is a vfat partition, marked as a UEFI boot partition) the system should boot without user intervention. However should it not, or you wish to boot a different device please follow these steps: 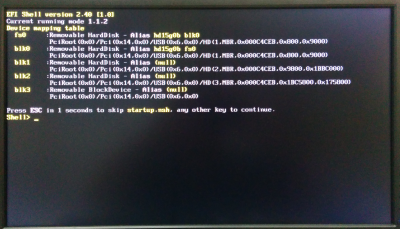 Plug everything into the MinnowBoard MAX and attempt a boot. Should it not correctly discover the UEFI boot information (there is at least one known issue surrounding this, that is being worked on), you will get a screen like the one to the right. This is the UEFI shell, and you likely have gotten here by one of a few methods: