The Android system has a logging facility that allows systemwide logging of information, from applications and system components. This is separate from the Linux kernel's own logging system, which is accessed using 'dmesg' or '/proc/kmsg'. However, the logging system does store messages in kernel buffers. 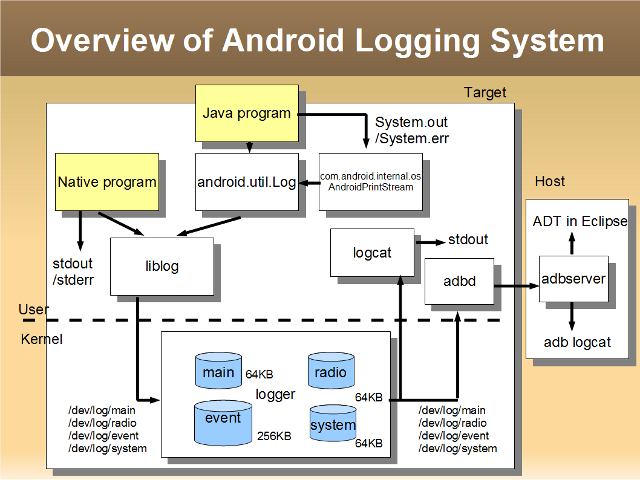 The logging system consists of:

There are four different log buffers in the Linux kernel, which provide logging for different parts of the system. Access to the different buffers is via device nodes in the file system, in /dev/log.

Up until 2010, only the first three logs existed. The system log was created to keep system messages in a separate buffer (outside of '/dev/log/main') so that a single verbose application couldn't overrun system messages and cause them to be lost.

Each message in the log consists of a tag indicating the part of the system or application that the message came from, a timestamp, the message log level (or priority of the event represented by the message) and the log message itself.

All of the log buffers except for 'event' use free-form text messages. The 'event' buffer is a 'binary' buffer, where the event messages (and event parameters) are stored in binary form. This form is more compact, but requires extra processing when the event is read from the buffer, as well as a message lookup database, to decode the event strings.

The logging system automatically routes messages with specific tags into the radio buffer. Other messages are placed into their respective buffers when the the log class or library for that buffer is used.

The kernel driver for logging is called the 'logger'. See Android logger

An Android application includes the android.util.Log class, and uses methods of this class to write messages of different priority into the log.

Java classes declare their tag statically as a string, which they pass to the log method. The log method used indicates the message "severity" (or log level). Messages can be filtered by tag or priority when the logs are processed by retrieval tools (logcat).

Event logs messages are created using android.util.EventLog class, which create binary-formatted log messages. Log entries consist of binary tag codes, followed by binary parameters. The message tag codes are stored on the system at: /system/etc/event-log-tags. Each message has the string for the log message, as well as codes indicating the values associated with (stored with) that entry.

Many classes in the Android framework utilize the system log to keep their messages separate from (possibly noisy) application log messages. These programs use the android.util.Slog class, with its associated messages.

In all cases, eventually a formatted message is delivered through the C/C++ library down to the kernel driver, which stores the message in the appropriate buffer.

It is sometimes useful to capture stdout from native applications into the log. There is a utility called 'logwrapper' which can be used to run a program, and redirect it's stdout into log messages.

You can use the 'logcat' command to read the log. This command is located in /system/bin in the local filesystem, or you can access the functionality using the 'adb logcat' command.

Documentation on the use of this command is at: http://developer.android.com/guide/developing/tools/adb.html

Note that the android logging system is completely separate from the Linux kernel log system (which uses printk inside the kernel to save messages and dmesg to extract them). You can write to the kernel log from user space by writing to /dev/kmsg.

I've seen a reference to couple the two together, to redirect android messages into the kernel log buffer, using the 'logcat' program launched from init, like below:

I'm not sure why you'd want to do this (maybe to put all messages into a single stream? With the same timestamp, if kernel message timestamping is on?)