BELA is a cape designed for BB Black which features real-time audio processing via usage of Xenomai threads. Apart from being a hardware solution, BELA supplies its own operating system based on Debian Linux distribution and a full-fledged IDE allowing for seamless audio development experience. BELA provides its own library for interfacing with the hardware, however it does not provide any unified interface via ALSA, JACK or PulseAudio. Therefore, it is currently impossible to use BELA like a regular Linux audio device and it has to be done by utilizing its API calls.

The project will also focus on writing all necessary components for interfacing with this plugin, such as an exemplary userspace application and instructions on how to use the ALSA API with BELA. BELA also features analog and digial ins and outs which should be representable in ALSA in the manner of channels or as MIDI interfaces. // TODO: totally not sure about this giuliomoro,

The first part - ALSA plugin will be realized basing on already existent ALSA plugins, like the file plugin which allows interaction with arbitrary files as if they were regular ALSA devices. If not for hardcoded syscalls in this plugin, we would be fine by simply using it for our problem, or writing some workaround and shipping custom libasound along with other BELA software. However, this solution is not the best idea, as we would rely on shipping this library and maintaining it in sync with the upstream. Hence, having a completely fresh plugin which could be used in various other applications is a better tailored solution.

The graph above shows how the BELA system operates and utilizes the ARM CPU and the PRU unit. It can be seen that there the PRU has an essential role in communicating with various peripherals and delivering the data to the ARM CPU. Since Linux kernel is running alongside the Xenomai kernel, the real-time guarantees can be met. This is especially important in such systems as this, and pairing it with the sheer power of Linux kernel makes this project especially valuable.

Whenever data is delivered, there is an almost instant (1us) context switch to the Xenomai Cobalt thread and the data is served to the user. Xenomai makes use of the hardware interrupts the BELA cape makes (//TODO: check?). 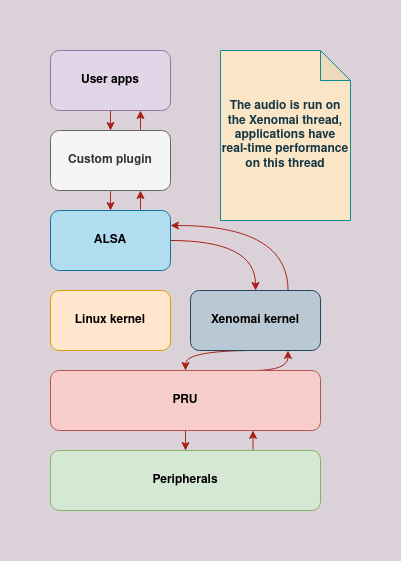