Since BeagleBoards are heterogeneous platforms, why not use them to their full extent? Apparently for the time being the GPU block lies mostly useless and cannot assist with any computations due to non-technical reasons. There exists a library made by the IP manufacturer but is not open source, and thus does not fit into the BB's philosophy of open SW/HW. The IP manufacturer(Imagination Tech) has even a series of teaching lectures of the subject, available [3]. Normally, OpenCL would be used for accelerating on the GPU, but taking the limitations discussed above it is impossible, yet there is another way! GPGPU acceleration with OpenGLES.

The GPU accelerators from PowerVR (series SGX500) are available in all BB's and a unified acceleration framework for them is the topic of this proposal. The targeted version of OpenGL ES is 2.0, but extending it to the future versions will not be a problem as the newer versions are backwards compatible. Moreover, it could open a way for new ways of computation acceleration, such as integer and 32-bit floating-point operations. The API of the library will allow for performing various mathematical operations (limited to a few for the GSoC part of the project), and will return the results to the user in the same format they input the data in. 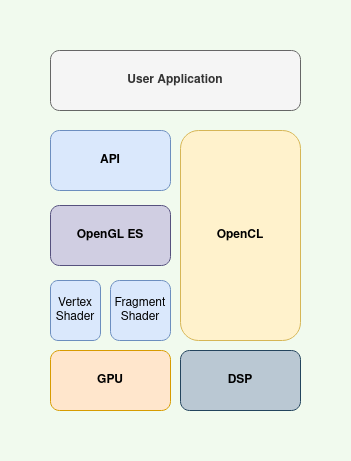 The implementation is described along the user flow below.

The API will be a C++ class, which will be accessible in a twofold way:

The skeleton of the class and some mock functions are presented below:

And the helper class for GL operations:

It would be nice to be able to have some templatized versions of these functions, and not overload them for each datatype. This is another idea for extension. Also having functions for performing arbitrary math operations, such as quick rescaling or some DL related ones, like ReLU would be welcome.

The data transformation has to be done from whatever the format user supplied to floating point values in range from 0.0 to 1.0, because the shaders in OpenGL ES 2.0 operate only on floats. // Please check this Also the data has to be mapped to a texture (if we use a texture for the computation).