Discussing the tentative ideas with Hunyue Yau and others on #beagle-gsoc IRC.

IRC: jduchniewicz
Github: JDuchniewicz
School: University of Turku/KTH Royal Institute of Technology
Country: Finland/Sweden/Poland
Primary language: Polish
Typical work hours: 8AM-5PM CET
Previous GSoC participation: Participating in GSoC, especially with BeagleBoard would further develop my software and hardware(BB X15/AI architecture) skills and help me apply my current knowledge for the mutual benefit of the open source community. I aim to deliver a component which will be usable in many upcoming releases of YOLO model and hopefully other models.

Project name: YOLO models on the X15/AI (with an extensible interface for other models)

The main idea of the project is to accelerate Deep Learning models with help of available hardware resources on the BB X15 and BB AI platforms. Current inference times are abysmal for any real-time (or even slightly laggy but bearable) application ranging from 15 to 35 seconds per frame. This is unacceptable and this project will alleviate this problem and enable efficient deployment of other models once the Texas Instruments Deep Learning library allows for that (RNNs, LSTMs and GRUs are planned to be released).

As more and more developers recognize the benefits coming from DL and utilizing specialized hardware for acceleration of these calculations, the inclusion of such support is vital for BeagleBoard community. Additionally, adding such a component may encourage new developers interested in developing DL solutions for embedded systems to join the effort and grow the BB developer community.

This project serves as a Pick and Place solution for running models on BBAI and X15, the programmer just adds their own network parameters and the network itself with the TIDL translation tool and calls the relevant API. This way, the programmer can effectively and quickly test the trained network on hardware.

The main focus on this project is to accelerate the YOLOv3 model using the TIDL library using C++ and maybe some intrinsics. In past there were some problems with YOLOv3 layers being not supported by TIDL, which should be fixed in this release (there is no confirmation on the forums with the AM5729, but the release notes of PSDK 6.03 mention support for EVEs + DSPs simultaneously).

Both X15 and AI could use the YOLOv3 models because they utilize very similar SoCs - AM5728 and AM5729. They both have DSPs and EVEs which I plan to use for realization of this task.

The end product of this project is a Github repository with the wrapper API and implementation of acceleration on the BBAI and X15. The repository can be cloned and built as a library or included as a single header? //TODO: check. 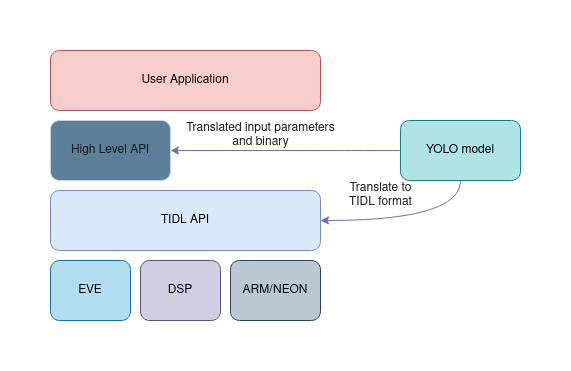 The picture above is a visualization of how this component will fit into TIDL ecosystem and allow easier deployment of YOLOv3 models on BB. (somehow it refuses my .png?)

My research into the TIDL framework proved it is possible to accelerate all layers of the YOLOv3 (what about upsample??) as shown in the paper.

If the network can be successfully deployed solely in the TIDL library, including offloading to ARM/NEON computations is not necessary. Otherwise such computations have to be performed and synchronized with the computation graph.

Since on BBAI/X15 there are 4 EVEs and 2 DSPs, the layers could be grouped so that their strengths facilitate the calculation process. For example, the EVEs could focus on 2D convolution operations while DSPs can do Pooling and Softmax, operations present in the YOLOv3 architecture.

Because we cannot parallelize the network sequentially (further layers depend on the input from previous), we must construct a good dependency graph and try to see where different computation resources may be utilized.

Among these, first one is the least efficient and the last one seems to be the most. At the moment I am not sure if a frame could be effectively split between EOs without losing some detections (probably could be somehow amended, but this is very difficult).

YOLOv3 utilizes bounding boxes with anchors which often span significant areas of the image. Chopping the image into parts would render this detection impossible.

We can use double buffering though, if we want to achieve good streaming performance and mitigate low FPS which will be surely present given limited resources. Having two pipelines running simultaneously can help reduce stuttering and give smoother detection for the user.

Combining these approaches would be ideal if somehow we can circumvent the inability to chop the image into several parts.

In case there are problems with available memory, the OpenCL memory DDR3 area can be extended as mentioned | here. This should allow for efficient utilization of available RAM and deployment of heavier models, like YOLOv3.

It is possible that some parts of the model will be not deployable or have subpar efficiency, then special programming subroutines for NEON FP instructions will have to be used. Also raw DSP programming and synchronizing heterogeneous processors using OpenCL may be in scope of this project in case of problems.

Expected result is a non-stalling experience of using the API and processing frames. The user can normally use all the CPU resources during the frame processing, but the EVEs and DSPs are blocked.

In case I cannot deploy YOLOv3, I will go with its younger sibling - YOLOv2 or even the _tiny_ version of v3. In case of v2, we will lose some accuracy and speed of execution which is why I prefer to deploy the YOLOv3 model. With the _tiny_ version, we will have very small inference times (hence big FPS), but the accuracy will be much lower and since BBAI and X15 are quite powerful, deploying _tiny_ models would be under-usage of its resources.

Thes resources used for this proposal, and for contingency:

The BB X15 and BB AI will be able to perform inference using YOLOv3 models in near real-time (maybe even allowing for using these boards for complex computer vision tasks). Additionally the BeagleBoard software codebase will have a good interface for deploying other models which would abstract the lower details of TIDL(or some other library future boards may use) interactions. The software will be prepared for rollout of newer and more advanced models.

Having such a component, BB community could easily deploy most common models on various boards and in turn reduce the effort required for implementing a computer vision solution.

As mentioned earlier, making this project a Pick and Place solution would make the training to deployment time and effort much lower for chosen networks.