Difference between revisions of "BeagleBoard Community"

The Beagle Board is a low-cost, fan-less single-board computer based on TIs OMAP3 device family, with all of the expandability of today's desktop machines, but without the bulk, expense, or noise (from beagleboard.org). It uses a TI OMAP3530 processor (ARM Cortex-A8 Core ~600MHz + TMS320C64x+ DSP ~430MHz + Imagination SGX 2D/3D graphics processor). See OMAP3530 features for more processor features. Target price is US-$149. The design goal was to make it as simple and cheap as possible, e.g. not having a LCD added, but letting you connect all add-ons available as cheap external components. See What is Beagle? and LinuxDevices article for more details.

The videos Beagle Board Beginnings and Beagle Board 3D, Angstrom, and Ubuntu give you a good intro about what BeagleBoard is about and it's capabilities. 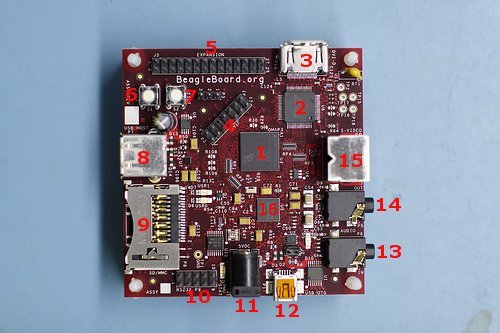 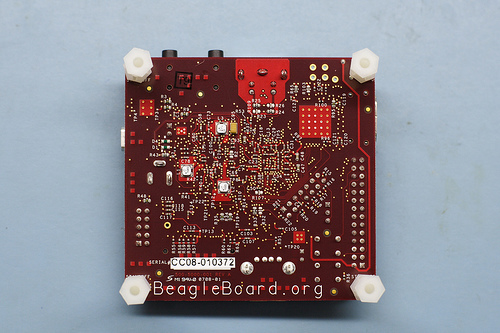 There is an error in the Rev B4 and Rev B5 manuals on tables 17 and 21. The B and C columns are swapped between pins 6 and 10 of the expansion connector. Columm A is correct. You can also refer to the schematic for the correct signals of the alternate functions on these pins.

Schematic of BeagleBoard Rev. B is available as part of BeagleBoard HW Reference Manual (rev. B5), from BeagleBoard.org design page or in PDF format. Please make sure that you read, understand and agree Jason's mail before using this.

Layout of BeagleBoard Rev. B is available as part of BeagleBoard HW Reference Manual (rev. B5) or from BeagleBoard.org design page. Please make sure that you read, understand and agree Jason's mail before using this.

Some notes about (ARM processor) clock rates at BeagleBoard:

Texas Instruments is developing a Pico Video Projector Kit (PVPK) as a peripheral for the Beagle Board. The stand alone pico projector will support VGA resolution (640 x 480), RGB 888 input through a DVI interface. The physical connector on the projector will be HDMI. See mailing list and Beagle Running Angstrom (VGA) on DLP Pico Projector for more details.

BeagleBoards, currently Rev. B boards, are available from Digi-Key with part number 296-23428-ND.

Note: Some users report that they got some questions from DigiKey to be answered before board shipping is done.

Note: While you get free shipping, most probably you have to pay tax e.g. ordering from Europe. Users report that they had to pay EUR ~34 - 44 VAT + importing taxes (depending on european country), resulting in EUR 137 - 147 ordering from europe.

The Rev. B boards currently oderable do not have support for the USB EHCI port (see hardware errata #5) and are not yet fully supported by the linux-omap git tree. These boards are being targeted only for early adopter developers. Rev. C boards (see below) will be available later under a different part number.

There are some limited early revision Ax prototypes out there used by some hackers hanging around at #beagle channel on irc.freenode.net. See errata for limitations.

Revision B is same as revision A, except

Revision C is same as revision B except:

Note: Revision C is expected earliest at November 2008. There are some early revision C prototypes out there, but they still seem to have USB host issue.

Some nice cases for your BeagleBoard are available from Special Computing. See SketchUp 3D model if interested in 3D models from Beagle, too.

For quite detailed information about all BeagleBoard peripherals see BeagleBoard HW Reference Manual (rev. B5).

See BeagleBoard peripherals and adapters page for useful add ons for Beagle Board.

Depending on your JTAG tool, you'd need a 14-pin to 20-pin adapter to use an ARM debugger. The 14-pin TI JTAG connector is used on BeagleBoard and is supported by a large number of JTAG emulation products. See BeagleBoardJTAG for more information.

The pinout on the beagle board is "AT/Everex" or "IDC10". You can buy IDC10 to DB9M adapters in many places as they are commonly used for old PCs. Depending on your local configuration, you may need a 9-Pin NullModem cable to connect BeagleBoard to serial port of your PC. From TinCanTools there is a RS-232 DB-9 adapter and adapter schematic available.

When using the OTG port in host mode, you must power the BeagleBoard using the +5V power jack. If you connect a USB hub, you'll probably also need external power for the USB hub as well, because according to the Hardware Reference manual the BeagleBoard OTG port only sources 100 mA. This is enough to drive a single low-power device, but probably won't work with multiple devices.

The Linux kernel needs to know you want to use the OTG port in host mode. I believe OTG ports are supposed to figure this out for themselves using the OTG Host Negotiation Protocol, but for now the Linux kernel may need some help. Specifically, Pin 4 (ID) of the OTG connector needs to be shorted to Pin 5 (GND) by using a 5-pin USB Mini-A plug which shorts these pins together in the plug. A 5-pin USB Mini-B plug leaves Pin 4 floating. Unfortunately, most USB Mini plugs are unmarked as to whether they are "A" or "B".

You can find "mini A" adapters that have Pin 4 shorted and offer out a full-sized USB A Female jack here.

Besides Nishanth' OMAP U-Boot Utils, to boot from USB or UART, you need a PC tool which talks with OMAP BootRom and speaks the correct protocol to download ARM target code to BeagleBoard. Currently there are two older (experimental) tools for UART boot:

Besides Nishanth' OMAP U-Boot Utils, for USB boot, there is currently one (experimental) tool to boot BeagleBoard over USB:

See USB recovery section how to use USB boot for board recovery.

You can create a dual-partition card, booting from a FAT partition that can be read by the OMAP3 ROM bootloader and Windows, then utilizing an ext2 partition for the Linux root file system.

Actually, Koen's prebuilt Beagleboard demo images are up to date binaries including e17 as window manager, the abiword word processor, the gnumeric spreadsheet application, a NEON accelerated mplayer and the popular NEON accelerated omapfbplay which gives you fullscreen 720p decoding. The www.angstrom-distribution.org/demo/beagleboard directory should contain all the files you need:

See the beagle wiki on how to setup your SD card to use all this goodness.

Besides above binary and source images (TI's and communities one), for various parts of Beagle software stack there are community supported git repositories available.

Steve did some work to consolidate and update X-Loader from various sources and put it in a X-Loader git repository. Get it by

Result will be a ~20k sized x-load.bin in main directory.

Currently, Beagle community is working at getting U-Boot patches upstream to mainline U-Boot. While doing this, Steve set up a Beagle U-Boot git repository. Get it by:

Result will be a ~150k sized u-boot.bin in main directory.

Git repository of OMAP Linux kernel contains Beagle support. Get it by:

The result will be a uImage in arch/arm/boot/ directory.

Some beagle developers maintain their own kernel experimental patches and hacks not ready for upstream:

Next CodeSourcery release is "is scheduled for October".

Note: CodeSourcery 2007q3 has an issue with -Os option. There is a fix (needs recompilation)

ARM Cortex A8 used in OMAP3 on BeagleBoard supports NEON instruction set. Some information about this can be found in ARM's RealView Compilation Tools Assembler Guide and from GCC's ARM NEON Intrinsics.

You can also utilize the full-CCS free evaluation tools for 120 days, but they currently require purchase to upgrade to service release 9 to support full JTAG debugging with supported JTAG hardware.

See BeagleBoard DSP howto for information about how to use the DSP.

If you played e.g. with the contents of the NAND, it might happen that the Board doesn't boot any more (without pressing user button) due to broken NAND content. See BeagleBoard recovery article how to fix this.

In the OE getting started document, for BeagleBoard replace MACHINE = "om-gta01" by MACHINE = "beagleboard". After confirming bitbake nano works, try bitbake console-image. The first time you run bitbake OE will download all the needed source and build the tool chain. This will take several hours. After all went fine, the output is in ${OE_ROOT}/tmp/deploy/glibc/images/beagleboard.

Note: Koen has some BeagleBoard source and binary images built with OE. There, Angstrom-console* images don't include an X server, you can still use a e.g. DVI-D screen with console, but you won't have a GUI. Angstrom-x11* images contain X server resulting in something like this.

The Eclipse C Development Tools Project provides a "fully functional C and C++ Integrated Development Environment (IDE) for the Eclipse platform". The Eclipse DSDP Target Managment Project provides a "Remote System Explorer" (RSE) plugin that simplifies downloading files to the BeagleBoard and editing files on the BeagleBoard within the Eclipse IDE. A Linux Target Agent is available as part of the Target Communications Framework (TCF) component. Info on how RSE is used for e.g. Gumstix development is described in this post.

Mamona is an embedded Linux distribution for ARM EABI. The main goal of the Mamona Project is to offer a completely open source alternative/experimental platform for Maemo using only free and open source components. Mamona 0.2 supports OMAP3430 Software Development Platform (SDP), so you can also use it at Beagle (OMAP3530), too. Work is being done to officially support Beagle.

There is a thread how to get a mediaplayer with NEON optimization (FFmpeg) to run on Beagle. Includes compiler hints and patches.

When using the OpenEmbedded-based Angstrom image you have the following options of Java support:

Java support in OpenEmbedded/Angstrom (details) is provided voluntarily through Jalimo.

You just got your new BeagleBoard, and now? See beginners guides.