Difference between revisions of "CI20 Hardware"

This page details the technical specifications and components of the MIPS Creator CI20 development board. 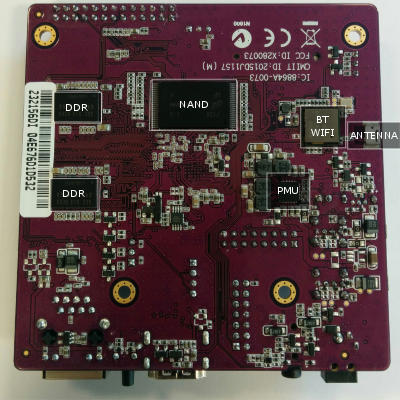 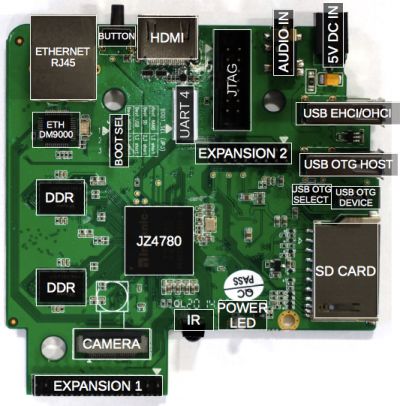 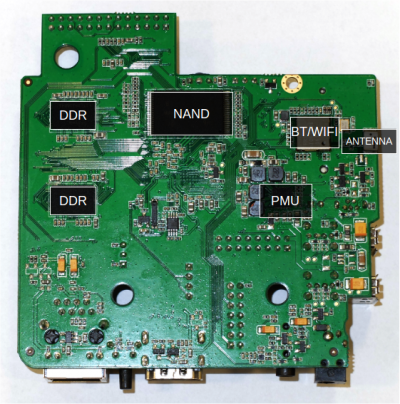 The power connector is a 5V 4mm (shield) x 1.7mm (pin) center positive connector. It takes 5V only. Note that this connection is identical to that of the original Sony PSP, so power cables intended for that console also work for the CI20.

Full sized HDMI connection with audio out support as well. The HDMI block on the JZ4780 supports HDMI v1.4a, and appears to be a Synopsys DesignWare HDMI controller, although this is not documented in the JZ4780 programming manual.

Paralleled with the mini-OTG connector.

Connected to the EHCI USB controller in the SoC.

Is paralleled with the left hand USB A connector - do not plug into both of these at once. Has the OTG VBUS controlled by the jumper next to it.

Controls the VBUS for the OTG ports-

The button between HDMI and Ethernet is not a reset button - it is boot_select0. Combining this button with JP3, it is possible to boot the Ci20 from USB or MSC0.

Once the kernel has been loaded, the button can be used as a GPIO - it is pin PD17.

See the silkscreen on the board and the section at the end of the JZ4780 programmers manual. Fundamentally you can boot from the on-board NAND or direct off the SDcard without having to press the button during boot. There is also a USB boot function available, but it is not a standard DFU type boot, and requires JZ4780 specific host support.

Standard pinout full sized SD/MMC slot that can be used for direct booting, or for bulk storage (standard MTD support under Linux). It is wired to the MSC0 block in the SoC. 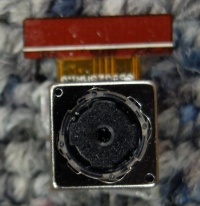 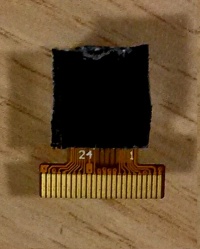 Closeup of back of compatible camera 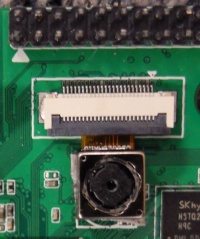 The camera connector is 24 pin (26 pins on the schematic - two of which are the side ground solder tabs on the connector itself - the actual cable interface is 24 pin), and CMOS DVP 8-bit camera compatible.

The connector installed on the CI20 is 24-PIN 0.5Pitch Bottom Contact FPC Connector

Note Be aware that there are some SMT components directly under where the camera unit sits. If your camera unit has a conductive rear surface then this may short out on the board. Symptoms we have seen include board resets. Please insulate the area either on the PCB or the back of the camera unit to avoid this.

The CI20 has an infrared remote control receiver (part IRM-2638A, carrier frequency 37.9kHz), which is connected to GPIO PE3 for software decoding.

The CI20 board features a dual colour red & blue LED. It is controlled by GPIO PF15, which also controls the USB VBUS supply. When PF15 is high the LED lights red, when PF15 is low it lights blue. Software cannot power off the LED. A simple way to toggle the LED colour is to write to the PFPAT0S & PFPAT0C registers from the U-boot shell, in order to toggle the PF15 GPIO. The following example will toggle the colours rapidly, leading to the LED appearing purple:

Version 2 of the Ci20 board adds 4 red activity LEDs. These LEDs are exposed via sysfs as described here.

Version 2 of the Ci20 board adds a system reset button.

Pinout and other functions of the dedicated UART header. This is uart4 of the SoC. Note that uart0 is on the 26pin main expansion header.

By default, the pins that UART3 is exposed on are used for EJTAG. UBOOT needs to be recompiled in order to modify this and you need to have compiled your own kernel from the Ci20 git repository.

Follow the steps for building UBOOT from source, but stop just before running make.

You need to compile UBOOT without support for EJTAG - this is done by editing the following UBOOT file:

Save the file and continue following the steps for building UBOOT from source.

The CI20's SOC is an Ingenic JZ4780 - see the data sheet and programmers manuals referenced on this page.

Is provided by a single Samsung K9GBG08UOA NAND flash, using an 8bit data interface to the SoC.

Is provided by a Davicom DM9000C connected via an 8-bit interface to the SoC, providing 10/100 ethernet.

Is an Active-Semi ACT8600 specifically designed for the Ingenic JZ family of SoCs.

A real-time clock chip is connected to the SoC via the I2C4 bus via PE12 and PE13.

On the first version of the board, the RTC is provided by a Pericom PT7C4337UE device, which is apparently compatible with the DS1337, supported in the Linux kernel by drivers/rtc/rtc-ds1307.c.

On the second version of the board, the RTC is provided by an AT5863S device, which is apparently compatible with the PCF8563, supported in the Linux kernel by drivers/rtc/rtc-pcf8563.c.

Description of the (rather small little silver dot) test points on the board, derived from the schematic.

The following links provide information (predominantly PDF files) about the SoC, board and components for the MIPS Creator CI20.

Overview on the Imagination web site

Schematic for V1 boards is available here. And for V2 boards here

Board components and identification

The following data is stored in the JZ4780's OTP ROM/efuse. This data can be accessed from Linux via the sysfs path of

The C definition of the actual efuse area data format is:

Board Revisions and changes

This is the current board being sold.

Note: All parts are untested and links are given as a reference for specification only.

The following are possible accessories that can be used for the board.

The onboard serial is 3.3V TTL compatible. The following link is an example part

The CI20 power connector is the same as the one used for the Sony PSP. So a PSP power supply can directly work.

Alternatively, you can use a USB-PSP cable with any standard smartphone/tablet USB PSU

Note: There is a lot of variation in these cables and USB power supplies. If your board randomly dies, power supply/cable can be a possible issue.

The following devices have been tested.