The BeagleBone can do many neat things right out of the box using just the USB cable and SD card that come with it. Before hooking up anything, if you are running Linux or OSX on your host computer, open a terminal at run:

This will record what devices are present on you host computer. Once you plug the bone in it will create a new device. Windows users don't have to do anything here.

Install the SD card (not the one that says Linux SDK on it) and attach the Bone to a host computer via the USB cable. The little USB connector goes to the Beagle in the connector on the bottom of the board near the Ethernet connector. Connect the large end of the USB cable to a host computer. The host can be either Linux, Mac, or Windows (though if you are doing development, consider running Linux on the host.) I give instructions for each.

The Beagle, powered via the USB, will boot up. You should initially see two LEDs blinking, near the Ethernet connector. The one labeled 0 blinks a heartbeat pattern. LED 1 blinks when the SD card is being accessed. After about 30 seconds LED 1 will stop blinking. The Bone is booted.

Here are some of the things it can do.

Here's a nice overview of the BeagleBone. It shows how to work with it using a Windows host.

On your host you will notice a new folder appearing. On Linux and OSX it's call BEAGLE_BONE. On Windows it's Beagle Bone Getting Started. Open it up and look around. The README.html gives lots of information about getting going with the Bone. Look at it in detail after going though this page.

When you are doing exploring the files, eject the drive (don't select SAFELY REMOVE DRIVE). Once the drive is ejected, the network will start up over the USB.

Built in USB to serial adapter

The Beagle xM has a serial port connector on board, but the Bone doesn't. Instead you access the serial port through the USB connector. The trick is figuring out how to access it.

The first line lists what devices are out there. The second compares that list to the list made earlier. What appears is the USB to serial device on the Bone. The last line starts a serial port program that attaches to that device. Notice the ttyUSB1 is the same string as returned by the diff command.

To find where the serial port appears in Windows, click on the start menu and search for Device Manager and run it. 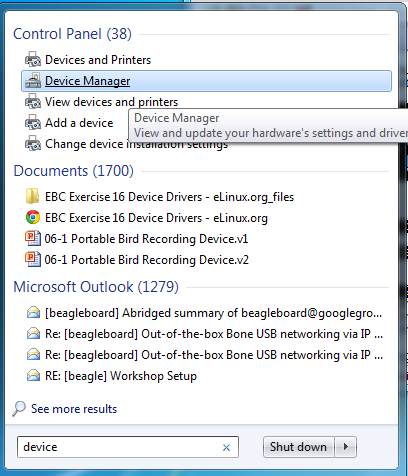 Select Ports and look for USB Serial Port. In my case the port appears at COM6. 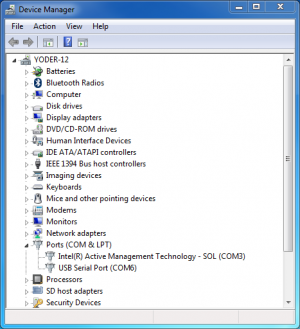 Start up a ECE497_Tips_and_Tricks#Serial_Port serial port program and connect. The baud rate is 115200.

Hit RETURN and you'll see the following. Login as root and look around.

One of the slickest features of the Bone is it's ability to access the Internet through the USB connection. The network connection starts up after you've ejected the BEAGLE_BONE drive that appears. Do it now.

You are now logged into the Bone through the network. This is much faster than the serial port (.115M vs. 100M) and supports many interesting network things. The only problem is, the Beagle doesn't know how to access the Internet through the host. Get back to the host computer by entering RETURN ~ ^Z. That is, hit RETURN, then ~ (it's up there near the ESC key) and then Ctrl-Z. This gets you back to your host, but leaves the ssh connection running.

Copy the following lines into a file call host.ipForward.sh

This will give you instructions on how to set up your host and will remotely set up your Beagle. Note: If you are using a wireless connection you should use host$ ./host.ipForward.sh wlan0

Once ./host.ipForward.sh has been run you can:

You should see Google responding. Hit Ctrl-C to stop.

Note: If you are using Ubuntu 12.04 and having an issue connecting to the internet, you may need to add a line to the /etc/resolv.conf file on the Bone. If ping google.com returns an "unknown host" error, this means that the Bone cannot resolve the url google.com to an IP address. Users with an Ubuntu 12.04 host may see this issue because the resolv.conf that Ubuntu uses (and is copied to the Bone in the host.ipForward.sh script) is not compatible with the Bone. The solution is to run the host.ipForward script as normal, then add the line "nameserver 8.8.8.8" above the existing entry in /etc/resolv.conf (run "nano /etc/resolv.conf" on the Bone to edit the file). This configures the Bone to use Google's Public DNS Server.

Congratulations! Your Beagle is now on the network through your host computer.

In a terminal window connect to the serial port

This is all nicely shown here in this silent YouTube movie.

Congratulations, you now have a connection to the Internet.

I don't have this working yet.

Once you have your Beagle on the network there are many things you can do. Try these from your host.