Difference between revisions of "EBC Exercise 10 Flashing an LED"

This page is for the Bone (Black or White) running the 3.8 Kernel. See EBC_Exercise_10_Flashing_an_LED_-_xM_WhiteBone for the White Bone or xM running 3.2.

The "Hello World" program is the traditional first program for many classes. Flashing an LED is the embedded equivalent. Here we will explore a few ways to flash an LED on the Beagle and explore General Purpose I/O (gpio) along the way. These calls will be done from the command line of the Beagle, so there is no need for the host computer.

(Note: Draw the new diagrams with this.)

The easiest way to do general purpose I/O (gpio) on the Beagle is through a terminal window and a shell prompt. In Linux, almost everything is treated as a file, even things that aren't files. In our class we'll use a virtual file system called sysfs. sysfs exposes the drivers for the hardware so you can easily use them.

Try this, open a terminal and type:

Explore some. What do you find? In graphics you will see the frame buffer supported by the processor. In sound you'll see the alsa sound devices.

The Beagle Black has four user LEDS, usr0 - usr3, that you can control. Try this:

Here you see the directories for controlling each of the user LEDs. By default, usr0 flashes a heartbeat pattern and usr1 flashes when the micro SD card is accessed. Let's control usr0.

This shows trigger can have many values. The present value is heartbeat. Check the LED, is it beating? You can stop the heartbeat via:

What does this do?

Adding your own LED

It's not hard to use the gpio pins to control your own LED. All you need is an LED and a 220Ω resistor. Here's a picture of how it's wired. We are just doing the LED at the top of the breadboard for now. 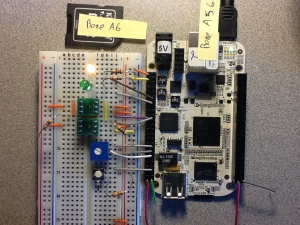 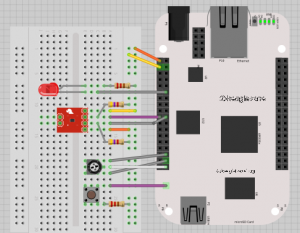 So how do you know where to connect it? The BeagleBone System Reference Manual has the details. Figure 45 on page 74 shows: 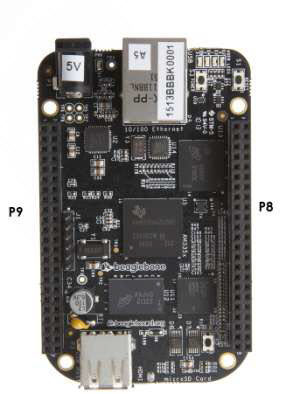 There at two expansion headers, P8 and P9. Look at the bottom of the left header and you'll see it's labeled P9. Table 11 on page 78 shows the pinout for P9. 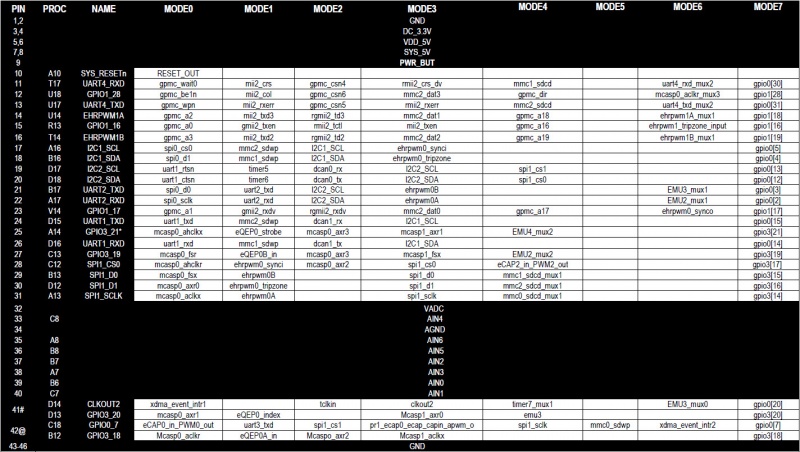 Presently no gpio pins are visible. You need to tell it which pin to export

Notice gpio60 has appeared. All we need to do is tell it which direction and then turn it on.

Your LED should be on! When you are done you can unexport the pin and it will disappear.

Now that you have an LED working, wiring in a switch is easy. The picture above shows a push button switch wired in at the bottom of the P9 header. Attach the + bus to one pole on the switch with a wire. The other end of the switch is attached to pin 42 which is gpio0_7.

Based on what you saw above, show how to read the switch.

Once you have the switch and LED working you can use the following scripts to play with them.

The LED should be blinking on and off.

Push the pushbutton and see what happens.

How can this work without a pulldown resistor? It turns out the Bone has an internal pulldown (and up) resistor that can be software enabled. We'll discuss how when we cover device trees.