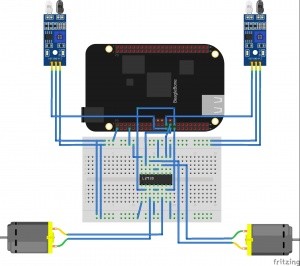 This project started out as a much more ambitious project, but do to time and money constraints, this project ended up the way that it is now. Implementing PWM using PRU GPIO and finding a way to increase the speed of the motor rotation would have been preferable, but the current state of the project is one we are happy with. Getting WIFI and startup functionality working took much longer than we expected, but getting it finished was worth the effort.