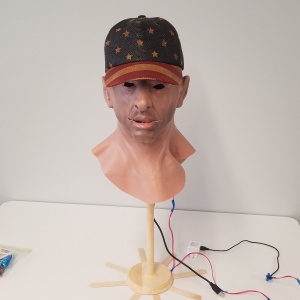 The dowels and wooden base are used to make a framework for holding up the mask as well as holding the beaglebone.

The motor's dowel is also connected at the other end to the base of the jaw so that the mouth can be opened.

Beyond the structure itself, one needs a microphone. I used a Logitech usb microphone that was made for the game rockband.

You also need a speaker. It can't be usb or use bluetooth over usb as the microphone is using that.