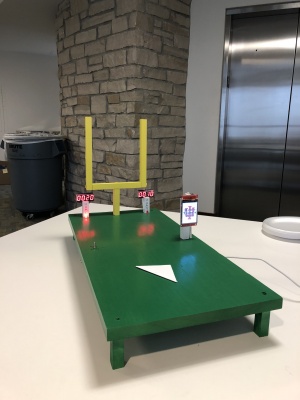 The Final Paper Football Game Board

This project consists of creating a paper football game board and adding digital features and automation including scoring, possession, and a jumbotron. Two 7-segment displays are used for the scoring for the Home and Away teams. There is also an LED for each team that will light up in order to indicate who has possession. A switch is used to change possession from one team to another. A jumbotron displays various prompts such as whose turn it is as well as videos pertaining to scoring.

The overall game functions correctly. The switch correctly switches between the home and away teams and lights up the correct LED. The LCD correctly displays prompts for whose turn it is as well as when someone scores. The reset button correctly resets the game. The IR sensors work very well except for the top sensor which somehow got burnt out during the final week of the project.

The top IR sensor stopped working entirely towards the end of the project. We are not positive why, but it must have gotten burnt out on accident. We did not have time to order a new part to replace it.

The overall hardware design and structure of the game board turned out great. It looks very clean on top of the board. The bottom of the board is a slight mess of wires due to lack of time to devote to cleaning up every single one. The overall functionality of the board is very good, but it is not perfect. We had many problems with the IR sensors. The bottom 4 work pretty well; however, the top one broke. Issues with our breadboard (internal shorts, etc.) led to many of the issues with the IR sensors. However, we ended up getting them to work fine minus the broken one of course.

Parts used for this project:

Getting the Necessary Hardware

Building the Wooden Board

For every screw used to assemble the structure, we recommend pre-drilling a small hole to prevent splitting any of the wood. 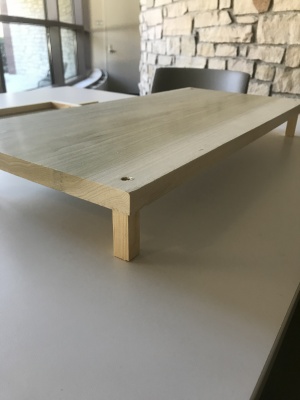 Next Build the field goal. 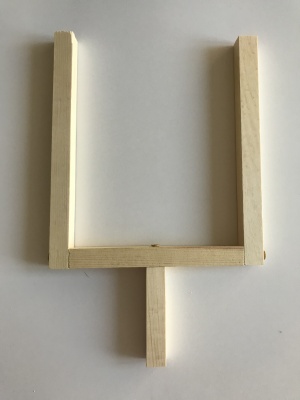 Cut the scoreboard and jumbotron posts 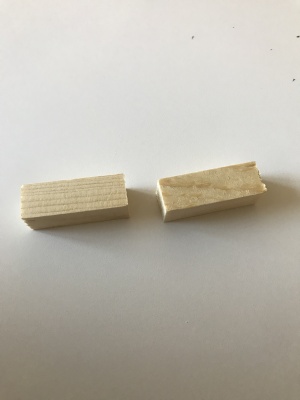 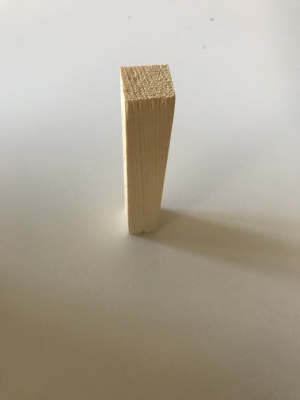 First mark the locations of the pieces, and attach all but the field goal at this time.

Fix posts to Board (Except Field Goal) 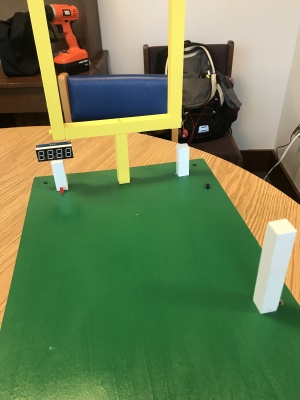 Assembled board with visual references

Adding the Components to the Board

Affix the Beaglebone and breadboard on the bottom of the board. Make sure that both are in range to be able to successfully connect the wires correctly to either of them.

Using super glue attach the transmitting ir leds equally on the back of one of the posts. 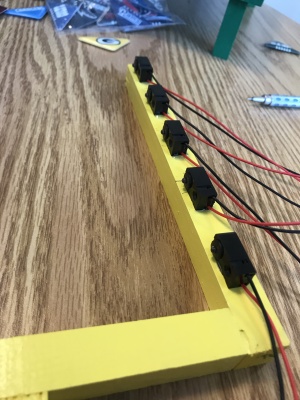 Next use a straight edge to align the receiving end of the sensors. If you wish to have more precision we used a printout of the a sensor pin while aligning them to detect if it was aligned correctly. Once we were confident in the position we superglued the sensor and repeated for each of the 5 pairs. 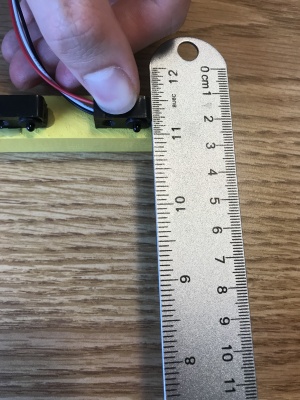 To test the sensor, we used the example program ir_sensors.py (in the examples folder of the GitHub repo) to give a preliminary test to see if it was aligned. 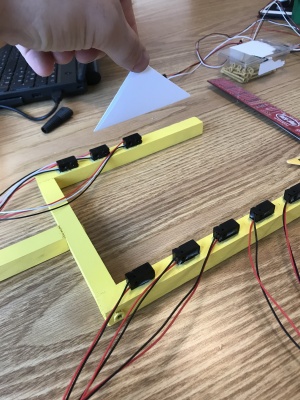 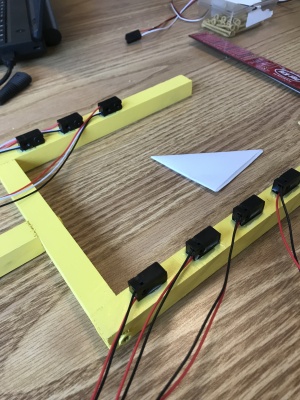 The last step for the field goal is to clean up the wires using shrink wrap, and finishing nails. A final product of our work is shown below. 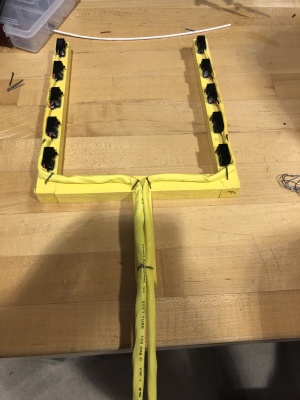 Squeeze the wires through the hole on the board and screw in the field goal into its final location. Then connect the wires to the correct pins on the beaglebone. 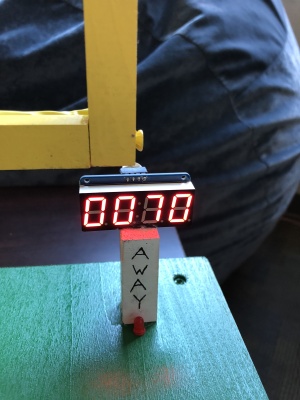 Once the cables are created and the displays is mounted, feed the cables through the holes behind the posts, and connect them accordingly.

Solder on extension wires to an LED, and feed them through the LED holes. Plug them into the corresponding pin. 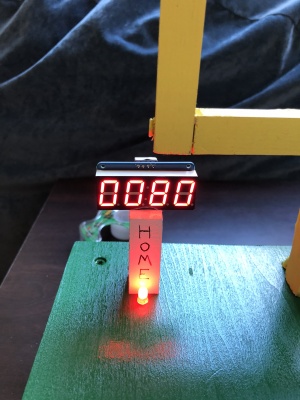 Solder on extension wires to the switch, and attach it to the board. Plug the wires into the corresponding pin. label which direction will correspond with the HOME and AWAY team. 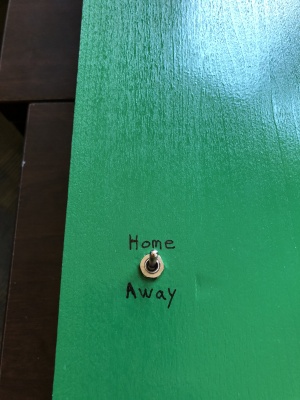 Home and Away Switch

Solder on extension wires to the button. Affix it to the bottom of the board, close to the front. We chose to do this on the right side. We also labeled the location with the word RESET. 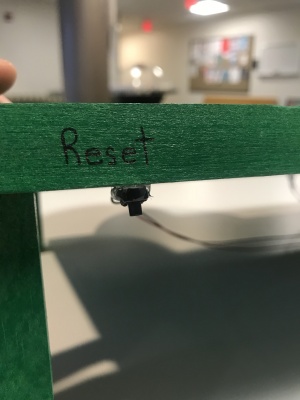 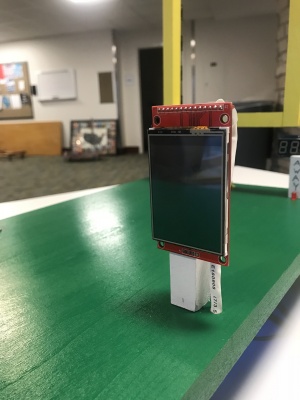 The Front of the jumbotron 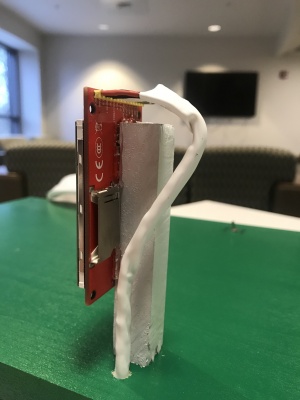 The Back of the jumbotron

Wiring the Components to the BeagleBone

How to run the program

To see how the advanced features of our project, presented in an exhilarating way click Here!

The overall software design for the project is rather simplistic. We created our project tin python in order to leverage the Adafruit libraries for each of our components. The main function configures the pins for the IR sensors, buttons, and leds. It also sets up 7 interrupts. 5 of the interrupts are for each IR sensor, and the other 2 are for the possession switch and the reset button. Each of the interrupts for the IR sensors calls the same ir_sensor interrupt handler which tracks the score for each team, updates the 7 segment displays, and updates the LCD. The possession switch calls a button_press interrupt handler that simply changes the current player between home and away. The reset button calls a reset interrupt handler that resets the scores, clears the 7 segments, and clears the LCD. 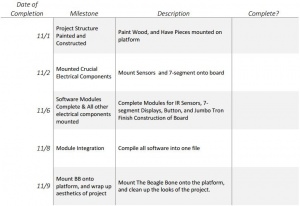 Group Work: The following tasks were worked on throughout the course of the project, and completed by the end.

Overall, this project was a lot of fun to work on. Aesthetically, we are very pleased with how it turned out. The basic functionality of the game works well; however, it is frustrating that we were having so many problems with the IR sensors and ran out of time to get them working fully again. We believe that we shorted one of the transmitter LEDs causing it to break, and were unable to fix it in the time we had remaining. The breadboard that we bought in order to mount on the bottom of the game board did not work correctly. One of the power rails was shorted and did not work; this caused many complications when it came to finding spots to plug the components in on the breadboard. As mentioned in the previous section, it would have been cool to be able to add a net to the board to catch the footballs, write the program in C and compare the speeds, and make a time-trial game where the user can see how many shots he or she could make in a minute. The final result of the project is awesome! We are very pleased with how it turned out, minus one of the sensors being broken.