Stay away from "stelios-k" on eBay. Attached is the photo of what we got from that guy, and you can judge for yourself.

I am the team leader of a small group of friends, we only had two working DHT-Walnut boards shared among five person, so we tried to buy other boards. Unfortunately we got contacted by a dude who asked 35 euro for shipping from Greece. Mr.Stelios-K privately reached one of my friends on a person-to-person marketplace of a forum where my friend had opened a "want to buy" topic several weeks earlier, and offered some boards in exchange for money and our free software support to his boards on eBay. Which was somehow "wow" to hear, we are all students and hobbyists with limited budget, but then he shipped boards in soft-cardboard, with the result that two arrived heavily damaged and we haven't yet found a way to repair, one board was "ok", while the fourth one was lightly damaged but has been recently repaired and it's now working. 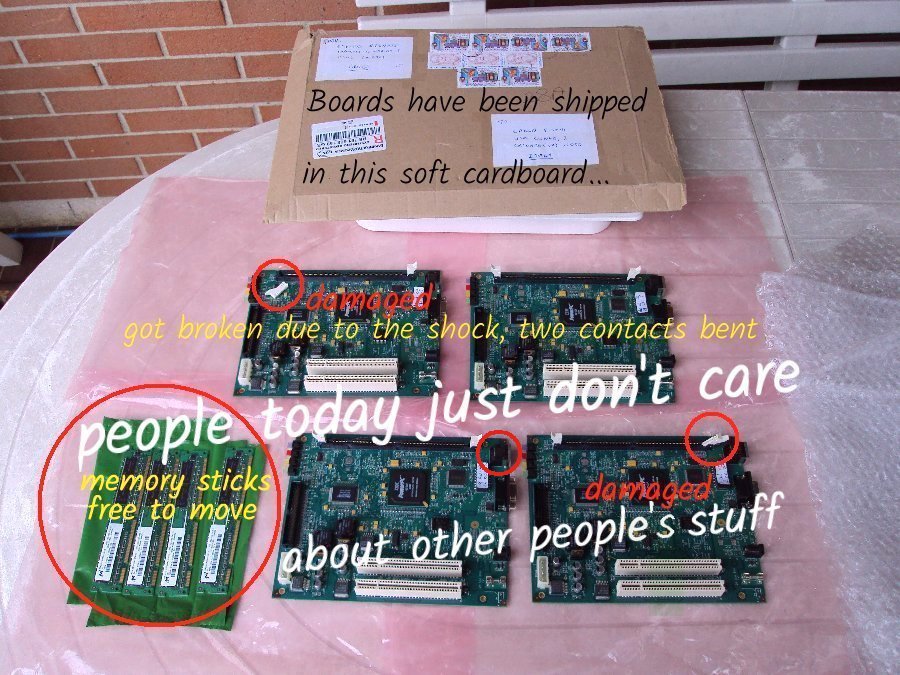 (To skimps out on properly packing was not a good idea, ain't it?)

Status of each board in the picture

We spent a lot of time to repair the board#2. It looked apparently fine, but the networking was not properly working, it randomly manifested weird and unexplained disconnections, inspecting the PCB we found the plastic of the RJ45 connector cracked so the cable didn't make good and reliable contact.

Once we replace the RJ45 connector things started properly moving. We spent time on the firmware, the problem was on the hardware, there is still a discussion in a forum about these weird issues.

The other two boards are more unfortunate, they have damages on the ram connector, and this make some contact between the stick and the controller completely unreliable, so these boards randomly crash and 90% of time the don't even pass the bootstrap. We still have to figure out how to hot-air-de-solder and replace a big DIMM connector without damaging the PCB.

What makes this story really annoying is not only he asked 40 euro to ship a soft cardboard(1) and didn't spent enough time to properly package boards, but he also refused to partially refund, pay for a repair, or to fix the problem in some way.

Now, 40 euro for a soft cardboard ground shipped is frankly too overpriced since I can ship up to 6Kg solid parcel via UPS-2nd class for 18 Euro within Europe's zones 1-4, with a delivery time of 4 working days!

Mybe Greece has expensive shipping services, I don't know, but if something goes wrong, you have to fix it.

To be honest, I have just looked at eBay, and the last two comments he received are positive

So, maybe these guys were lucky, maybe we were unlucky, maybe being on eBay forces him to expend more energy working on properly packaging, may be he learned the gold lesson that it's never a good idea to less time, care, money, and material on something than is necessary in an attempt to economize.

I don't know, but if you want and advice: don't accept private deal with that kind of person unless you are ready to handle the worst case, and if you really want to buy, buy on eBay, so if you will receive garbage from Stelios-k and he will refuse to provide a solution then he will be reported to the community with a well deserved negative feedback, as well as a report to eBay who will kick him out after several bad reports like this.

We still need to find more boards so each person in our small group can develop alone: we currently have three working boards, we are looking for two/three other boards, if you have one for sale, please contact us!

You will receive our eternal gratitude!