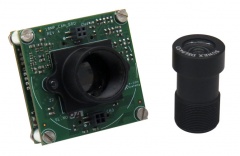 "IP Cameras" are fairly easy to find and tend to be a good option. Gigabit Ethernet cameras (1 Gbps) has enough bandwidth for uncompressed 1080p video streams. eg: GigE cameras (untested) or regular IP network cameras. Nico notes that older GigE cameras typically do not apply any compression, since compression is a feature of the newer GigE Vision 2 standard, and thus most industrial GigE cameras for computer vision don't have compression and send Bayer images instead. IP cameras typically have M-JPEG compression as well as a video streaming server such as by providing a URL where M-JPEG or JPEG frames are available.

CSI is the ideal method for camera input, since the cameras are tiny and the images can be processed directly by the ISP rather than needing to be stored into the computer's DRAM first before processing.

No CSI MIPI camera has currently been tested on Jetson TK1.

Licensing of ISP has been reported as the constraint as it is only generally viable for millions of units.

Several users (eg: HellMood have been able to use a Kinect camera on Jetson TK1, after disabling the USB auto-suspend (mentioned above).