To quickly test some GPIO pins

To set GPIO_PH1 as an output: 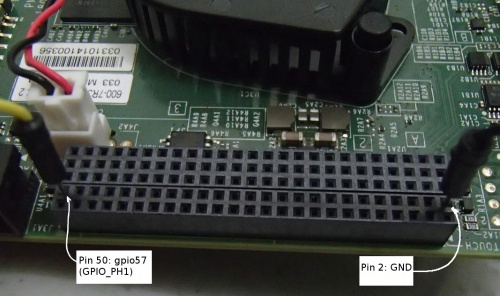 In addition to gpio57 shown above, you can also access gpio160 to gpio166 (ports GPIO_PU0 to GPIO_PU6) as GPIO, and potentially various other pins too if you don't use 2 CSI cameras, etc.

You can also play with PWM output via sysfs at runtime too! You’ll need to make sure that the pinmux is set up so that PWM is routed to the pin, and that the GPIO for that pin is not claimed, so that the pinmux function is not overridden. Again, you’ll need the following in .config:

Note: In the L4T kernel, the “soc0” directory component might not be there, and the PWM controller might be named something different like “pwm.0” or “pwm.1”. You might want to just run “cd /sys; find . –type d –name pwmchip*”.

Note: You might need to replace “0” in the commands below with a different PWM channel ID:

and when you’re done:

For I2C, the commands you want for direct access are i2c{detect,dump,get,set}. Better would be to write a kernel-mode driver for the device, so that user-mode access isn’t required.

The GPIO pins on Jetson TK1 are all 1.8V logic and are low-current, meaning that you can't simply attach common 5V or 3.3V logic signals or devices directly to the Jetson TK1 GPIO pins. There are several options for using the 1.8V GPIO: