You can also do the equivalent sysfs operations by writing code that accesses those files (eg: using C/C++, Python, Perl, Bash, Java or whatever you want) and then running your code using root permissions. There is an Introduction to sysfs-based GPIO video with associated source-code showing how to do this using C/C++ (shown for BeagleBone, but sysfs-based GPIO programming is the same on Jetson TK1). More details are in the Jetson TK1 Vision-controlled GPIO tutorial.

In addition to gpio57 shown in the GPIO Tutorial, you can also access gpio160 to gpio166 (ports GPIO_PU0 to GPIO_PU6) as GPIO, and potentially various other pins too if you don't use 2 CSI cameras, etc.

Full pinouts are provided in JTK1_DevKit_Specification.pdf, but the PDF is protected and it can be a pain to work with tabular data in that format. This is a transcription of the J3A1 and J3A2 pinouts, with an added column for connector row. (Try sorting by that, to easily see which pins are adjacent.) You should be able to paste this into the spreadsheet of your choice for easier manipulation:

See the PWM page for details about how to generate PWM output, such as to control the speed of a motor or brightness of an LED.

See the I2C page for details about I2C on Jetson TK1.

See the forum discussion for details about SPI communication.

You can also find a detailed tutorial on using the touch screen SPI of the Jetson TK1 to send and receive high speed data (25 MHz). It shows how to connect the Jetson's SPI channels to an Arduino Due to stream high-speed data back and forth. Detailed instructions are provided that show how to configure the kernel to enable spidev, how to modify the device tree to create a spidev controller, and includes source code for both the Jetson TK1 and Arduino Due to stream data. It also shows how to use the Jetson connector and level shifter boards described below in the electrical connections section. You can find the post here: http://neurorobotictech.com/Community/Blog/tabid/184/ID/11/Using-the-Jetson-TK1-SPI--Part-1-Why-is-SPI-important.aspx 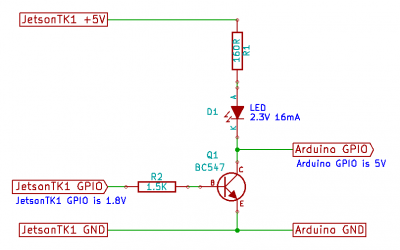 The GPIO pins on Jetson TK1 are all 1.8V logic and can only supply a few milli-amps of current, so you can't simply attach common 5V or 3.3V logic signals or devices directly to the Jetson TK1 GPIO pins. There are several options for using the 1.8V GPIO: 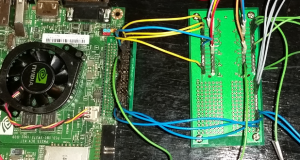