The Tegra K1 SOC in Jetson TK1 is aimed at tablets and thus typically uses between 0.6W to 3W of power during normal use and rarely uses more than 4W, but is able to reach 15W if you manage to push the CPU, GPU, camera ISP's and codec hardware to their limits. Meanwhile, the rest of the Jetson TK1 board uses between 1.5W to 45W depending on what you plug into it (through USB, mini-PCIe, SATA, SD-card, HDMI, audio, GPIO, expansion port, etc). The absolute max power draw of Jetson TK1 if you push everything to the limit and use every port including SATA and PCIe is 58W (4.8A @ 12V). So a 10W to 15W power supply is enough for powering Jetson TK1 in most cases, but a 60W power supply will ensure you always have enough power in all cases.

Here are some measurements of the total power draw for the whole Jetson TK1 board (when running on 12V and without any power reduction customizations):

As you can see from this table, the whole Jetson TK1 board including CPU & GPU and fan uses a total of 1.6W when you aren't really doing anything, while a graphical desktop adds roughly 0.6W for the HDMI port & GPU-accelerated desktop effects, and the eMMC disk can use about 5 Watts of additional power. As mentioned above, the Tegra SOC typically uses between 0.6W to 3W during normal use, but can potentially use much more than this in extreme cases. More detailed power measurements during different loads are shown in the Power draw during computer vision tasks section, where you can see the power draw when the CPU & GPU are pushed to their limit.

The Jetson TK1 board comes with a large fan+heatsink combo attached to the SOC, to ensure the board is always safe to touch by humans even when running both the CPU & GPU at max performance for long durations. The fan is rated at 12V 1.4W, but the Jetson TK1 is only running it at 5V thus it's only using 0.4W of power. But some users may want to remove the fan and replace it with a passive heatspreader or heatsink, either to reduce power or increase dust-resistance or lifetime or simply to get rid of the fan noise. The fan+heatsink is clearly much larger than it needs to be, so it can be replaced by a small fan or large heatsink without a reduction in performance or safety.

The Tegra K1 SOC is designed for tablets that use a small heatsink or heatspreader plate, thus clearly it doesn't require a large fan. But tablets aren't expected to run at full performance for long periods, and you also can't touch the SOC of a tablet with your bare fingers, so NVIDIA decided to use a large surplus fan for Jetson TK1. If you wish to replace the fan with a heatsink, take into account that if you will be pushing the SOC to its limits for long durations, the SOC might be using upto 10W - 15W of power that you must dissipate with a large heatsink and/or external fan and/or attaching a heatspreader to the metal case of your overall device, otherwise the internal Tegra thermal management may reduce the performance to ensure it won't overheat.

NVIDIA has tested a simple 2" x 2" heatspreader (a thin flat sheet of Aluminium) and found it to be fine for most use-cases. They ran an intense Optical Flow computation on the GPU using ~7 Watts of power in the Tegra K1 SOC and found that the heatspreader got warm but not too hot to touch. Thus for most light & medium workloads, a heatspreader is good enough. If you are expecting to run heavy workloads (eg: 4 threads of efficient NEON SIMD CPU code, or efficient CUDA code using the entire GPU) for hours of continuous use, then a heatsink as mentioned above (or obviously the fan-heatsink that comes with Jetson TK1) is recommended, to ensure there is enough cooling of the Tegra SOC. 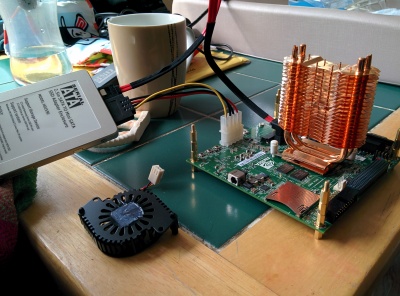 It hasn't been tested by NVIDIA, but rough estimatations suggest that a 1.5" x 1.5" x 0.8" Aluminium heatsink (such as an Aluminium Malico MBH33002 or Copper Malico CMBA054949 north-bridge heatsink) would allow pushing Tegra K1 to its limits for long durations while not getting hot enough for the SOC to reduce the performance or burn human skin.

An alternative for European users (as finding suitably sized heatsinks in Europe is very tough) is the Connectland 1504002 Heatsink which is a dual heatpipe copper finned design from a French company. It can be found on Amazon UK for around £10, as well as on eBay and some other EU mail order retailers. This model comes with tongue and groove links which let you attach the heatsink to the existing holes on the Jetson TK1, see the image on the right for an example.

Controlling the performance and power draw

As a general guide, the different options for CPU perf/power (sorted from highest power draw to lowest power draw) are:

(These are all described in the Performance page).

Turning off the HDMI port if a display isn't required

If no HDMI monitor is plugged in during bootup, then the Jetson TK1 board will use less power since various display related features won't be enabled. Also, turning off the HDMI port can slightly reduce the power usage of the board. Run this as root (see the section below on how to get root privileges):

Moved to the performance page.

Powering the Jetson TK1 board with a battery

The Jetson TK1 accepts a standard 2.1mm DC barrel plug (center-pin is positive while the outer ring is negative) and is rated for 12V DC input, but will actually work with any input voltage between 9.5V to 13.5V. Note that SATA disks require a fairly precise 12V, so you shouldn't be using voltages at those ranges if you will power SATA hard drives from the Jetson TK1. It is known that the Jetson TK1 board won't turn on at less than 9.5V and it will likely be damaged at 16V or above. It may also be possible to power the Jetson TK1 board somewhere in the 13.5V to 16V range but NVIDIA has not tested this.

Since Jetson TK1 needs a voltage between 9.5V to 13.5V, there are several options for powering the Jetson TK1 by batteries:

A battery pack made of several battery cells in series to have roughly 12V can power the Jetson TK1 board directly. The voltage output of a battery varies quite a lot when it is fully charged compared to fully drained, so you need to make sure the voltage will always be within the recommended voltage range. Several good battery options are:

A voltage regulator can produce a stable 12V DC voltage from a higher voltage, thus allows some battery options:

If you are doing a one-off test then you can simply attach a multimeter (such as a Backlit Digital Multimeter for $7) across the positive & negative of the battery to measure its voltage, or in between the battery positive and the Jetson TK1 positive wire to measure its current (make sure you plug your test lead into the 10A port of your multimeter instead of the 200mA-fused port!). If you want an onboard display, you can attach a small inline meter (such as a Voltage & Current Monitor for $5) onto your robot or device so you can easily check it at any time, and see when the battery voltage is too low and thus needs recharging. Current meters such as those above will show the total current draw of the device, so to get the power draw, multiply the Current (Amps) by the Voltage (Volts) to get Power (Watts). For example, if you are powering your Jetson TK1 from a 3S LiPo battery pack, then it is roughly 11.1V on average, and if you are measuring 0.3A (or 300mA) on your current meter then 11.1V * 0.3A = 3.3W and thus your whole board is currently using roughly 3.3 Watts of power draw. (This changes a lot depending on what you are running on your Jetson at the time).