Back to RPi Hardware Basic Setup.

As yet, the foundation does not provide cases for the Raspberry Pi. The small form factor or low power draw however, allow you to put it in almost everything. 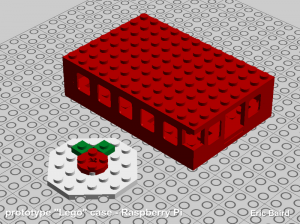 I just had a go at knocking up a quick Lego case prototype. Since I don't know the metrics of all the connections, it's a bit of a "proof of concept" right now, but since's it's not exactly difficult to take out any offending side-pieces and move them if they're in the way of a beloved connector, I'm assuming that this isn't a big deal.

Also, because of the thin side-walls, a bit of additional hacksawing or dremeling shouldn't be too difficult.

I've limited myself to only using pieces that are currently available from Lego's "Pick a Brick" shop, in red. :)

I've tried to fit everything into an 8*12 grid footprint, which will hopefully fit … but I don't have the specs of the thickness of the thin wall-pieces, so no guarantees. One thing that might screw things up is the height of the board's connectors: I don't know whether they'll all fit within the upper and lower lip of the side-wall pieces. If the board's "USB port stack" is too high, I guess the "roof" could be raised by a tile or two.

I knocked it up with Lego's Digital Designer program (free download from their site). The critical Lego piece is the repeated hollowed-out "side wall" ("[") brick ("wall element 1*2*2, w. window"), which you'll find on LDD's parts palette behind the little "door" symbol, or under the Pick a Brick page, as element #4507686, design #60032 (red), cost 8 pence each.

Download the Lego Digital Designer file for this case

I had a bit of a play in lego designer with the idea of a vertical case – the USB / ethernet would emerge from the top, and the power usb would be on the bottom – possibly using a right angled usb connector. It's possible to alter the sides to allow for gaps for the various bits that stick out. There are lots of transparent bricks available – also includes a 2 x 2 brick to stick the raspberry pi sticker on.