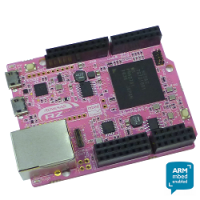 The GR-PEACH is an mbed platform with an RZ/A1H and a single QSPI Flash device. While it was intended to be used with the mbed cloud development environment, the board itself can be loaded with Linux, and particularly XIP Linux (since you only have the 10MB of RAM inside the RZ/A1H).

In order to program the board, or to enlarge its flash disk size some hardware modifications are required.

It is possible to run Linux on the GR-Peach board. Please refer to: