Difference between revisions of "Sparkfun: IR Receiver Breakout Board"

This Page is Still Under Construction

The TSOP85338 operates with a carrier frequency of 38kHz. That is, when the IR sensor is receiving an IR signal that is being modulated at 38kHz it outputs a logic 0. Using the BeagleBone to send a message to the TSOP85338 can be done using one of its PWM outputs. To perform testing of these attributes, ehrpwm1:0 can be used. By setting the duty_freq to 38000 and duty_percent to 50, it is possible to toggle an IR LED which if received by the sensor will output a logic 0. If the TSOP85338 is not receiving this modulated IR signal, it outputs a logic 1. 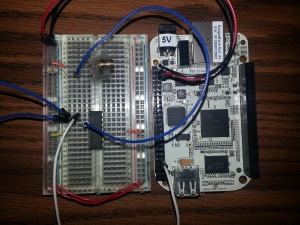 This is and example layout of the piezo vibration sensor using an op amp and the beagle board.