Difference between revisions of "Tux Droid" 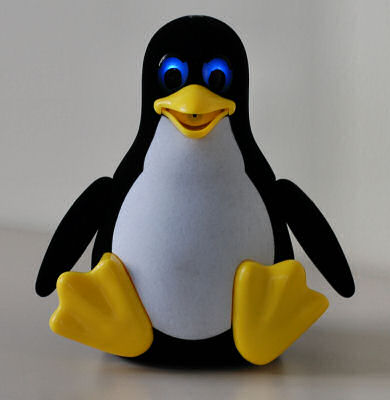 Tux Droid is a small companion to your linux system in the form of a tux. It is not a standalone system but acts as a peripheral to your linux box. Most of the software to drive the Tux is open source. The Tux Droid is manufactured by a Belgian company called Kysoh. Hardware schematics are also available.

The Tux Droid as such consists of three parts.

The first part is the Tux itself. This one has three Atmel AVR microcontrollers. One for wireless connectivity, one for audio playback and one for all remaining functions.

The second part is a fish-like device called the Fux. This is a USB device that handles the communication with the Tux. Internally it has two Atmel AVR microcontrollers. One handles the USB while the other handles the wireless communication.

The third part is an RC5 remote control.

Tux itself has the following hardware elements:

Note that the wireless communication is in the 2.4Ghz band, but it is not 802.11 compliant.

A description of the hardware internals can be found here. Schematics of the Tux and of the Fux.

The droid itself does not run linux. It acts as a peripheral and has very limited local intelligence. E.g. if remote control commands are received they are transmitted to the controlling PC for handling.

Two versions of the software exist. The latest version is web driven. The software is written in python and C.